The Women’s March movement was born out of the Women’s March on Washington, which followed the inauguration of President Donald Trump. The movement has  seen more than 4 million women come together in more than 670 sister marches all over the world.

YWCA Canberra’s Executive Director, Frances Crimmins, spoke at the Canberra Women’s March on January 21, calling for more to be done to address the gender inequality and discrimination issues that many Canberra women continue to face. The event brought hundreds of Canberrans together in solidarity with women around the world, as part of a peaceful and inclusive global demonstration in defence of women’s rights, health and safety. 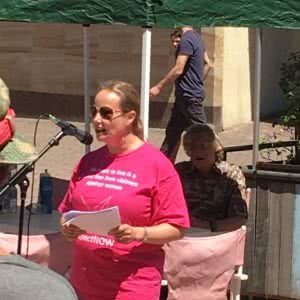 Below is a transcript of Frances’ speech, as delivered at the march.

I am delighted to have the opportunity to speak briefly with you all at this important gathering of solidarity and equality.

I note that my white, able-bodied privilege frames my values and opinions. I have a safe home to live in, I have two children, a loving partner and family, I live well.

I like to draw attention to this privileged position when I speak publicly, as it’s something that is often overlooked by people who are lucky enough to possess it.

This includes people in positions of power, who have the ability to address the complex intersections of disadvantage experienced by many people in our community – be it due to their gender identity, ethnicity, culture, sexual orientation, religion, physical or mental capability, or simply their appearance.

As the Executive Director of YWCA Canberra, one of the longest standing women’s organisation in the ACT, I have the privilege of continuing the work of the wonderful Y women who came before me, who worked tirelessly for the last 87 years to make this town a more equal, safe and inclusive place for all.

Our vision is “women shaping our communities”.

Why? Because we know that when women hold positions of leadership in our governments, businesses, families and communities – everyone is better off. But more on that in just a moment.

It’s important to point out, on an occasion like this, that we are a member of the Australian YWCA movement, which has representation in every state and territory in the country, (apart from poor Tasmania!), and we’re proudly part of the global YWCA network, which connects 120 countries and 25 million women and girls.

In partnership with the World YWCA, in Geneva, and hundreds of member associations around the globe, we advocate for peace, justice, human rights and care for the environment.

Globally, the YWCA movement has set a goal that “by 2035, 100 million young women and girls will transform power structures to create justice, gender equality, and a world without violence and war.”

At YWCA Canberra, we believe that to achieve this goal, we need to promote and sustain women’s leadership – and push for a gender equal society.

The social and economic case for gender equality is crystal clear – women make up one half of the population and deserve equal access to health, education, economic participation, and decision-making power.

Ensuring that we adequately use half of our ‘talent pool’ improves economic growth, competitiveness and future-readiness.

Not taking action is costly, with research suggesting that failing to address gender inequality costs Australia $195 billion or 13 per cent of Gross Domestic Product (GDP).

But let’s stop for a moment and really think about what a gender equal world would look like.

In a world like this, our local and global leaders would acknowledge the fact that achieving gender equality benefits the whole of society.

A world like this would acknowledge that when women are able to participate equally in employment, and have safe, secure, and healthy lives, it has a positive impact on everyone. 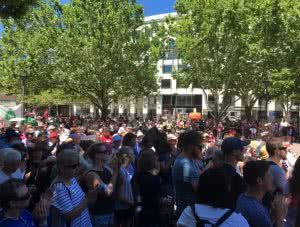 A world like this would ensure that we use half of our ‘talent pool’ to improve economic growth, competitiveness and future-readiness.

A world like this would not tolerate any form of discrimination or violence, including trafficking or sexual exploitation.

A world like this would not tolerate any form of harmful cultural or religious practices, including early and forced marriage, or female genital mutilation.

A world like this would recognise and value unpaid care and domestic work.

But unfortunately, as it stands, gender inequality is rife globally, in Australia, and right here in the ACT:

At YWCA Canberra we know that a gender equal society will not just emerge organically. It needs to be driven by strong leadership, legislative and regulatory reform, and appropriate resourcing.

The economic and social benefits to the community are too great to overlook this vital social policy reform.

After the recent ACT election, YWCA Canberra released a series of policy priorities, the first of which deals with this very issue.

We’re now meeting with government leaders to work through the tangible, evidence-based changes they can make, in order to take a significant step towards a more gender equal society.

Specifically, we are calling on the ACT Government to demonstrate its commitment to gender equality by:

These are small but important changes that will pave the way for more significant reforms in order to progress gender equality here in the ACT.

I invite you all to join YWCA Canberra, and work with us to ensure the vision of a gender equal ACT becomes a reality.

If we continue to stand and work together, as we do today, I believe that it will.