This article is part of our member profile series. Our members tell us that one of the things they love about being part of our community is getting to know like-minded women. So, each month, we’ll feature an interview with a member, so you can get to know each other a little better. Today, meet Gemma Nourse 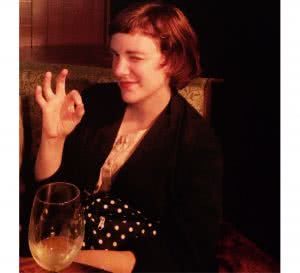 I’m a third-generation Australian Greek, born in Darwin. I had the great fortune of growing up surrounded by a strong Greek family, and was especially lucky to have had a number of amazing, resilient, fiery, passionate Greek women all having input in my upbringing. They have taught me about strength and hard work, and how to make a mean spanakopita.

I left home and moved to Canberra when I was 17, ten years ago, and studied politics and history at ANU. I did an honours year and wrote a thesis on the subject-formation of ‘the girl’ in early 1950s Australia (shout out to Foucault). I had always been interested in issues relating to gender and sexuality, and was incredibly blessed to be able to work with Dr Jill Matthews as my Honours supervisor. On our first meeting, she gave me a long list of amazing feminist works and said ‘get stuck into these and I’ll see you in two weeks’. The next meeting, when she asked how I had gone, I started tearing up in her office, I was so moved by the things I had read and learnt. I began to stammer out some kind of explanation, but Jill just looked at me with warmth and kindness and told me that it’s OK, she understood, and I knew she did. Since then, I have done some more study in gender and sexuality at the University of Sydney, which was also fantastic, and one day would love to do more research in a topic related to women’s health.

These days I work in a non-government mental health service provider, as a social worker in a new women’s mental health service. I love my job and feel very committed to helping to improve the lives of women and LGBTIQA folk through my work and future study. Outside of work I like hanging out with my partner and our dog Louie, studying French, and power lifting. I also have a solo music project called No Stars and am in a band called Earache.

My staples are always Cat Power, The Microphones/Mount Eerie, The Breeders/The Amps/any band with Kim Deal, and Grouper. Because I’m learning French, lately I’ve been seeking out bands who sing in French. My favourites at the moment are Genevieve Castree/O Paon and Stereolab. My favourite song to dance to alone in my bedroom is Y Control by the Yeah Yeah Yeahs and I love pretending to be Karen O.

What I was like as a kid. I was pretty odd and precocious. The first CD I bought, when I was seven or eight, was a performance of Mozart’s The Marriage of Figaro, followed closely by Hanson’s Middle of Nowhere. I had formed my first ‘band’ when I was in year 2 or 3, and wrote songs for us to sing which, from memory, were basically copies of the songs in Grease. I also wrote plays and novels, and recall being especially committed to writing from the perspective of a Victorian-era orphaned girl, like Anne of Green Gables. I also had a giant poster of Elvis Presley in my bedroom, and adored all of his (let’s face it, quite sexist) movies. I don’t think people really knew what to make of me.

Oh man, lots of good stuff. Going to Japan last year for four weeks was amazing. Playing in my band Earache. Moving back to Canberra and reconnecting with all the awesome people here has also been very lovely.

Probably the French filmmaker Agnes Varda. I’m so in love with her. She makes these amazing, sensitive, experimental, odd films, and was one of the only women in the French New Wave scene. She’s a powerhouse and has churned out so much interesting work, which isn’t so easy in a male-dominated industry, and has told lots of important female-centric stories. I especially love her films The Gleaners and I and The Beaches of Agnes. She’s also half-Greek like me which—oddly, as her work doesn’t always explicitly explore this—makes me feel especially close to her.

I think the way I’ve spent the past few years since finishing uni, moving around Australia a bit and trying stuff out. It was really fun, but also kind of hard sometimes because I often came up against this feeling of anxiety that there was no clear ‘path’ for me (and still do, sometimes). I worked at a bakery in Adelaide and took my dog to the beach almost every day; I worked at a café, studied film-making and eventually helped make delicious gluten free bread in Sydney; I started practicing meditation; I saw lots of good bands and films and read a ton of great books; I did more writing. I also had my first brush with feelings of depression, which wasn’t a good time, but I feel like I’ve come out of that knowing myself better and understanding more what makes me feel good and grounded and connected to myself.

To support an organisation whose values and aims I believe in, and to meet like-minded folk.

All the women and LGBTIQA and POC folk out there finding their voices, doing their thing, writing books and making art, creating safe spaces and community movements, being strong and true to themselves and really owning it.

Less straight white men in positions of influence and more everybody else, please.