Emma Davidson is a former community sector worker and current convenor of Women’s Electoral Lobby Australia. Emma is running as a candidate for the ACT Greens in Murrumbidgee (Woden-Weston). 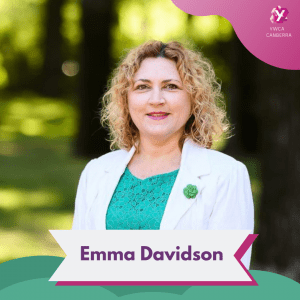 Read our interview with Emma and hear what gender equality means to her below.

What can you tell us about yourself and how you’ve found being on the hustings so far?

Having supported Caroline Le Couteur in 2016, and Dr Penny Kyburz as Greens candidate for Senate in 2019, I understood the work ahead of me. But in 2020, expect the unexpected.

In March, I went to New York to support a group of Aboriginal and Pacific Island women working to end violence against First Nations women and volunteered for Bernie Sanders’ campaign. It was a learning experience about advocacy during a pandemic!

But the biggest thing I’ve learned has been here in Canberra: people care deeply about supporting each other and caring for the world we live in. When commentators talk about people motivated by self-interest, our beautiful community comes together to show there’s many more of us who believe we’re a society, not just an economy.

What motivated you to run as a candidate for the election?

As Convenor of Women’s Electoral Lobby Australia, I have advocated strongly not just for more women as political representatives, but for progressive policies that empower and support women and girls. That means working within an intersectional feminist framework and looking at ways in which the diversity of women’s voices and experiences can be raised in making more inclusive policies.

Having worked in the community sector, including at Equality Rights Alliance within the YWCA Australia family, and the Women’s Centre for Health Matters, I’m still advocating on many of the same issues as a candidate. The difference is that if the campaign is successful, I’ll be in a much stronger position to enact the things we’ve been asking for all these years.

What are you hearing from women in your electorate?

Housing affordability is a major issue for women of all ages, with calls for more public and community housing, and affordable private rental housing.

Caring for our environment, with many making the point that we face a global existential threat from climate change and need real action now. Protecting biodiversity and our green spaces are important to many in our community.

Protecting democracy is also important – having a cross-bench MLA who can ask hard questions of Government, and push for more community involvement in decision-making by Government.

Making our neighbourhoods safe spaces for everyone to walk or cycle, including better street lighting, footpaths, and bus stops.

YWCA Canberra’s election platform prioritises three key policy themes; safe, secure and affordable housing, preventing violence against women and valuing early childhood education – how do you believe we can achieve these outcomes in the next Assembly?

ACT Greens plan to invest $450m in social and community housing to ensure everyone has a home. This includes more beds for domestic violence crisis services, as well as wrap-around supports.

And we want to prevent violence against women by working on the gender inequality that underpins it. This means reducing the gender pay gap through greater sharing of unpaid workloads across genders, supporting women to move into higher paid careers, and properly valuing and supporting the feminised community services sector.