Our lives: a survey of more than 1000 Canberra women

Our Lives: Women in the ACT set out to investigate whether the common headlines describing Canberra as ‘economically progressive’ or ‘safe and inclusive’ were an accurate reflection of women’s experiences. Launched at the ACT Legislative Assembly on 29 October to an audience of community sector stakeholders and members of the ACT Legislative Assembly the survey project captured the insights of women residing in the ACT.

The purpose of the survey was to gain an understanding of women’s lives in the ACT, their roles in the workplace and the home, their hopes and fears as well as their movement through public spaces. With 1090 responses, the survey achieved strong representation across all age brackets particularly among women aged 25 to 34 years. Response levels also delivered good representation across personal income brackets and education levels.

The demands of unpaid labour, the prevalence of housing stress and women’s experiences with violence and sexism were themes that emerged in the survey. Our lives: Women in the ACT endeavoured to complement existing public statistics that tell us a lot about what a community looks like but can fall short in telling us how a community feels. It is clear from the responses that the demands of unpaid work and the obligations enveloping women’s lives are leaving them stressed and burnt out.

Financial security: It is clear from the responses that the demands of unpaid work and the obligations enveloping women’s lives are leaving them stressed and burnt out. Women are still 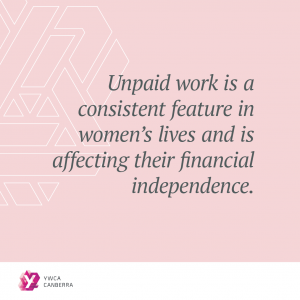 performing the bulk of unpaid care and taking time off work to care for others.  Our survey revealed that:

Housing: As a long-standing provider of housing to local Canberra families, we have seen first-hand how the confluence of population pressure and increasing unaffordability are impacting older women in Canberra. Our survey results show that renting privately among older women remains a common form of tenure with 11 per cent of respondents aged 45 to 64 saying they were renting a property.

With stagnant wages, impossibly low vacancy rates and growing unaffordability, housing stress is a feature in the Canberra community. Housing stress occurs where the cost of tenure exceeds 30 per cent of household income which is also in the bottom 40 per cent of income distribution. Our survey highlighted women’s susceptibility to housing stress if their circumstances changed.

Living in Canberra: Living in Canberra was seen to have become harder in the past 10 years for the majority with respondents noting wage stagnation and rising living costs as a barrier to living comfortably in Canberra. Others noted how the inaccessibility of social housing and job insecurity was a factor. 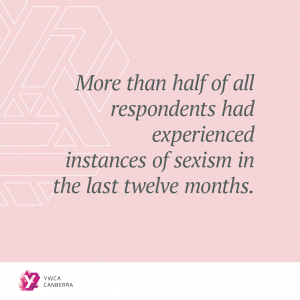 Robust data collection is fundamental to good policy. It allows for a window into people’s lives and a comprehensive understanding of experiences and perceptions that are vital in the development of government services, policy and urban design.

Our last two budget submissions have advocated for improved data collection around women’s perceptions of their safety in public. While perceptions of safety for people living in the ACT are statistically good, the ongoing absence of gender disaggregated data creates a sizeable blind spot for government responding to safety concerns by better planning and public policy. To be truly representative of our community, further research and better collection methods are needed to survey the experiences of those with disabilities, LGBTQIA+ people, Aboriginal and Torres Strait Islander women and those from culturally diverse backgrounds.

We hope this survey is the first of many to come and that with proper consideration given to the role of community services in collecting information from hard- to-reach cohorts.

You can read the Our Lives: Women in the ACT publication and some of the anonymous responses.

You can read the next article in this series here.