At YWCA Canberra, we are fortunate to have built strong partnerships with organisations that support gender equality and women’s leadership. National Australia Day Council are a friend of the She Leads Conference 2017. We had a chat to Carolyn Ludovici, General Manager of Programs and Operations, to find out just what the Australia Day Council do, and what the importance of the Australian of the Year awards are. 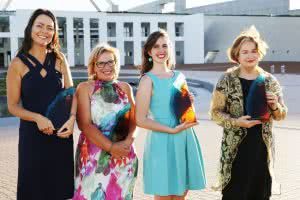 What work does the National Australia Day Council do?

We’re all about celebrating what it is to be Australian and the wide range of people who make up our rich, multi-cultural country.

Why does Australia have Australian of the Year Awards?

The Awards are all about telling stories. It’s the stories that are told across the country that help define who we are as a nation.  Profiling role models and their stories of achievement we look to inspire and unite. To challenge us all to make our own contribution to creating a better Australia.

What is the process of nominating to become an Australian of the Year?

Nominations come from the public and have to be for someone other than yourself. We have thousands of people nominated every year. It can be someone you know. Or someone you’ve only heard about. A story that ignites the imagination and compel you to jump on our website and fill out a simple nomination form.

Is it important to encourage female nominations for the Award?

Absolutely. There’s no hiding that if you look over the 55 year history of the Awards more males have been announced than females.  However, the Awards has certainly celebrated many women in recent years. Rosie Batty. Ita Buttrose. Fiona Wood. It is important the Awards continues to reflect the significant contribution that a range of different Australians make to shape the society we live in today

The awards make a point of showcasing leadership across a wide range of sectors – why is diversity in the selection process important?

The Awards are a reflection of Australia. Australia is a multicultural society that unites a multitude of cultures, experiences, beliefs, and traditions. It is important we seek to tell stories of achievement from across this spectrum of Australians.

What benefits are there to being named an Australian of the Year?

Simply being nominated for the Awards is a great achievement in itself; Becoming a State or Territory at the national Awards ceremony is a great honour. Many Australian’s of the Year also use their Award as a way of highlighting a particular part of Australia that is important to them: often influencing the conversations that happen across the nation.