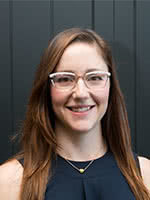 Joanna is passionate about contributing to positive social change through strategic communication. Having worked in both the for purpose and private sectors, Joanna’s particular areas of expertise include digital and traditional public relations, partnership brokering, fundraising, advocacy, and multimedia production.

Prior to her role at YWCA Canberra, she was Manager of Communications at the Foundation for Alcohol Research and Education, a national, independent, for purpose organisation working to prevent alcohol-related harm in Australia.

In 2015 Joanna was selected as one of Her Canberra’s “15 Women to Watch”, and in 2013 one of Mamamia’s “Most Clickable Women”, recognising her contribution to strategic communication in the for purpose sector.

In 2013 Joanna was selected to participate in the World YWCA international internship program, where she was involved in strategic advocacy and communication initiatives at the 23rd Session of the United Nations Human Rights Council.

Joanna holds a Masters of Strategic Communications from University of Canberra, where she is also a Sessional Academic Tutor in Digital PR and Media.