Recognising the realities of our lives in Canberra

We were honoured to launch our second report into the reality of life in Canberra for women and non-binary people, Our lives: women in the ACT. This report, an update from our 2019 publication, was the result of surveying over 1200 respondents living in Canberra. It provides an insight into how life in Canberra has changed over those two years, including the impact of COVID-19 on women’s lives and the progress of gender equality. 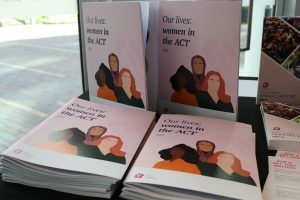 We were joined by around 40 members of the community, including government, community sector organisations and advocates, and YWCA Canberra members, at our official launch at the Kambri Cultural Centre at ANU.

The report’s findings will make a significant contribution to our advocacy priorities in the year ahead and reinforce what similar publications, such as Canberra VitalSigns 2021, have found: that the number of Canberrans who are little more than one paycheque away from crisis is growing. This is particularly the case for those in our community who have a combination of factors such as renting privately, being over 45, being a single parent and earning a low to modest income, as Frances Crimmins summarised in her address:

“Unaffordable housing, an austere and deliberately cruel welfare net and diminished capacity to put aside savings, plus the fallout from the pandemic, has meant COVID-19 has effectively broken the buffers Canberrans had that were just barely holding together.”

To interrogate some of these findings more, the event featured a panel discussion chaired by YWCA Canberra CEO Frances Crimmins. The panel featured local women at various stages of their lives and careers to capture the diversity of people reflected in our survey findings and the dynamics of women’s lives as they age.

Housing is central to individual wellbeing and was a pivotal theme throughout the survey itself. The report’s findings reinforced anecdotal reports from community service organisations: that older, single women are increasingly being squeezed in private rentals and their prospects for a safe and comfortable retirement are limited. Between our 2019 and 2021 reports, the number of women aged 45 and over who had accessed specialist homelessness services in the past 12 months had doubled.

Having worked in the field for over 30 years, Meredith noted how successive governments had avoided responsibility in this area, even though the solutions (such as increased funding in public and social housing) are well known. As Meredith put so eloquently, “given the data, we need an increase in specialist homelessness services and gender-responsive budgeting. There’s no excuse.” 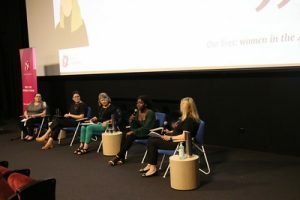 Rabi shared her personal story of life as a young person new to Canberra, including extreme difficulty finding employment and the challenges her guardian has had in finding suitable, affordable housing for their large family. This struggle is still ongoing after more than a year. We have lobbied on this reality for some time, as it becomes increasingly evident that the supply of affordable family-sized homes has not kept pace with rental stress among families on low to modest incomes.

To determine vulnerability to financial shocks, the survey also asked respondents about their ability to meet rental costs if they were to lose their job. Most significantly, responses to this question indicated that single parents who are renting are under enormous financial pressure, with 61 per cent telling us they did not have sufficient savings to maintain rental obligations for one payment cycle if they lost income.

This is something close to Jo’s heart, as she was a single parent of two while trying to establish a career and pay the rent. Jo reflected on a quote from a survey respondent who said she was “forced to move due to rent increase and forced to accept a poorly maintained property due to the tight housing market.”. As Jo noted, “It was hard [for me] to find rentals, and you just had to take what was available. I’m a Commonwealth Public Service: if it’s hard for me, image what it’s like for those more vulnerable.”

Jo also reflected that this was compounded by difficulties getting promoted in her career because “there was always an assumption that as a single parent and an Aboriginal woman, I had no career expectations.” 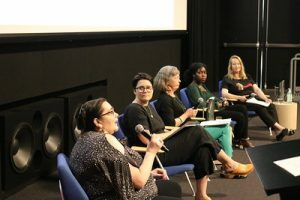 Jo’s experience neatly summarised the underlying narrative of the report: that our society’s perspective of a person in poverty or housing stress needs to adapt to the reality that many full-time workers are in crisis or living below the poverty line due to high living costs.

One theme that came up throughout the panel was that, despite many people thinking that we can return to our ‘new normal’ soon, the ramifications of COVID-19 will stay with some for the rest of their lives. This includes women who accessed their superannuation to make ends meet during the pandemic, who were most likely to be single parents, young people and renters. As Hayley noted, “Women have mortgaged their futures. What are we going to do in 20 to 30 years’ time to say thanks for this sacrifice?”

Our lives also pointed to the impact of COVID-19 on safety at home. Hayley spoke about how her research echoed the report’s findings, demonstrating that for many, COVID-19 coincided with the onset and escalation of violence. The report also highlighted how an overwhelming majority of respondents were feeling burnt out and stressed, a finding that didn’t surprise the panel. As Hayley said, “women carry the burden. The expectation is we carry the responsibility of emotional care for our family and extended family.”

The panel brought to life the stories of Our lives. Through them, we were able to learn about life in Canberra for a single parent, a survivor of violence, a young migrant woman and an older woman looking for secure housing. We learnt about the value of community services and the important work performed by organisations like the Multicultural Hub’s Multicultural Youth Services, the need for gender-informed research and analysis in policy development and planning and the value of data in advocacy.

Read Our lives: women in the ACT.