Reflections from day one of World YWCA Council 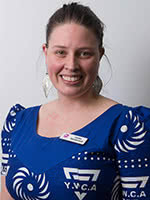 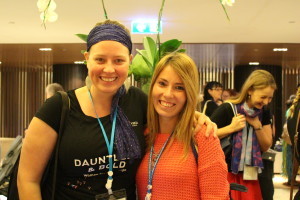 Caitlin with her good friend Silvina from YWCA Argentina.

A delegation of YWCA Canberra members, Board Directors and staff are currently at the 28th World YWCA Council in Bangkok, Thailand, as part of the YWCA Australia delegation. They will be participating in knowledge sharing, collaborating, and setting the strategic directions for the movement for the next four years. We’ll be sharing their reflections and experiences through our blog. First, we hear from Caitlin Sandercock, YWCA Canberra Vice-President, on her first day at World Council.

With a mixture of trepidation and excited nerves we gathered together in our delegations, as a band of Thai drummers began to rumble to mark the beginning of the opening parade. Despite having lamented a number of times that the Australian delegation’s ‘national dress’ uniform of a t-shirt and scarf paled in comparison to the glittering saris and brightly printed kaftans of our YWCA sisters, I have to admit that when we all stood together – we looked pretty good!

As we filed into the ballroom for the introduction and the first plenary of the 28th World Council, I felt a sense of just how far a reach our movement has internationally – 500 women present from 69 associations from all corners of the globe – all gathered with the common purpose of improving the world for girls and women through gender equality.

While part of the reason I relish my involvement in the YWCA is being able to feel connected to my local Canberra community, I felt an incredible sense of solidarity and sisterhood sitting at World Council, reiterating just how much we are also part of a global movement.

One of my favourite parts of the first day was chatting to delegates during the breaks, from Tanzania to Hong Kong to Argentina, and realising that while our activities and approaches are so different in each country,  we also have so much in common!  I think it’s these commonalities that help us to work together at an international level, bringing about global changes in activism and advocacy, while at the same time, local associations provide much needed services that fit their community’s needs.

I went from feeling in awe of our international impact in reach, to inspired and incredibly moved when listening to the amazing work undertaken by YWCAs on a local scale – often with limited financial resources, but passion by the bucketload!

One of the recipients of the Mary Robinson Young Women’s Leadership Award for Human Rights, CZ from the YWCA of India, spoke about how her own journey as an HIV positive woman had motivated her to work to provide assistance and services to other HIV positive women living in her community.

CZ also spoke about how seeing a previous recipient of a Mary Robinson award had inspired her to keep going with her work, despite facing incredible challenges.  In spite of all that she had achieved, she was incredibly humble, and attributed her success to the women working with her and the support from her family.

Listening to her speak just reiterated how much of an impact the Y can have in each community, at a local level, and deepened my resolve to try to learn as much as I can from the experiences of other delegates this week!