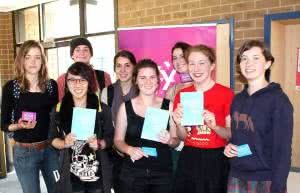 In December 2014, YWCA Canberra was thrilled when Relationship Things received a prestigious Partners In Prevention Community Award from the ACT Office for Women.

The annual awards recognise best practice strategies and activities that create awareness of gendered violence in order to prevent violence and sexual assault against women and children in the ACT.

Relationship Things empowers young people to develop and maintain safe and respectful relationships. It challenges stereotypes that support gender inequality, which leads to violence against women.

Find out more about Relationship Things or read our media release.

At the awards ceremony, the keynote address was provided by Lieutenant General David Morrison, OA,  Chief of Army. We were so impressed with what he had to say at this event that we secured permission to republish his speech here. Thanks to the ACT Office for Women for running the Partners in Prevention Awards each year, and granting us permission to republish the Chief of Army’s keynote address.

It is an honour to be invited to address this event today and an honour to be an Ambassador for White Ribbon. It is my view that in the matter of violence against women leadership, especially from men, is urgently required.

The matter that I am going to address affects us all. It is about who we are – as a community, both nationally and globally.

I have seen, first hand, great violence perpetrated against women and children, almost entirely by men, around the world in the course of my long career as a soldier. I have stood beside the shattered remnants of families, crushed by the crimes committed against them, despairing that they will ever be able to live in hope again.

In Iraq, Afghanistan, Timor, the Solomon Islands, Bougainville; all so far from Australia; all so remote from the lives we lead.

But here is the rub. I have come to understand that the terrible things that happen in warzones – murder, rape, assaults, the stripping away of dignity, the absence of hope – they are just as much present in our own communities, in our own families, as they are in other more seemingly troubled countries. It’s just that they happen behind closed doors, away from the lens of a war correspondent, ignored by neighbours or even family members, unspoken but just as life shattering.

If it was just the statistics the picture would be grim by any measure – one women is murdered every week in Australia by a current or former partner. One in three women over the age of 15 has experienced physical or sexual violence at some stage of their lives.
But it is not the statistics – it’s the lives. It’s the hopes and aspirations that we, all of us, men and women, should have as our birthright as Australians. Aspirations and hopes that are smashed and rendered useless sometimes by those who are seemingly closest to us.

And it’s not just individual lives, as terrible as this violence is. It’s how, as a consequence we define ourselves – as men, as brothers, as sons, partners, and husbands, as Australians, as leaders within our communities, our institutions and our Nation.

This is a bleak view. I am no sociologist. I have no anthropological training, but I am certain of this: we live in a world where, increasingly, the squandering of women’s talent, the traducing of their potential, is a global disgrace.

By every credible measure, women are denied opportunities that are accorded to men as a birthright of their sex. At home they face levels of domestic violence that imperil their very being. This is the case in so called first-world nations and in the developing world; it is a feature of secular and non-secular societies. Women face barriers, sometimes tangible, often subliminal, that constrain their lives and their contributions to the development of our world.

We need men of authority and conscience to play their part – and we most certainly need women, too long denied a strong enough voice, to be given the opportunities to lead – in all endeavors, in all parts of our polity and society. We all need to come to grips with our culture and how much it counts.

I have been at the forefront of cultural change in the Army and I think I only now understand just how important culture is.

It shapes our perspective of who we are: as Australians, as members of a particular profession, as supporters of a sporting team. It is usually intangible: a sense of identity, a shared but often unspoken alliance with others of our group. Indeed, it is so intangible at times, it defies ready definition and wilts when examined forensically. When it is made tangible it is often through totems – a badge, a slouch hat, a national flag. It is bolstered by the stories we tell each other about ourselves and herein lies culture’s great strength and weakness.

Why? Because in the hands of some, the stories that we tell each other about ourselves are exclusive, not inclusive. They reinforce a view of “us and them”. In hyper masculine environments, like armies, “them” is defined by being weaker physically, not drinking ‘like a man’, not bragging of sexual conquest, being more introverted or intellectual, and of course being female.

Further, I think that these stories are buoyed by aspects of our national culture in a way that makes it very hard for men to resist the pressures to conform to some distorted masculine image. It is a national culture that sees, in the wake of a terrible incidence of domestic violence, in which the lives of a mother and her three children are taken by the man who is the husband and father, media reports that focus on how hard his life had become; how much he had been a loving man even in the act of murder.

It is a national culture that results in a male journalist thinking it’s appropriate to make sanctimonious pronouncements about mandatory reporting to Rosie Batty, a woman who had suffered domestic violence for 11 years before her son was brutally, and publically, murdered by his father at cricket practice.

Rosie Batty is full of courage. She shouted back her response; but her experiences have left her begging the Australian public to allow victims of violence to “be heard with compassion and without judgment”.

Attitudes that tacitly condone or tolerate violence are recognised as playing a central role in shaping the way individuals and communities respond to that violence. The attitudes that attempt to justify a violent action, attribute it to external factors, trivialise its impact or shift the blame from the perpetrator to the victim, are key to why these terrible problems continue, seemingly unabated.

What can be done? The first step is recognise this great, essential issue that confronts us all. In that, White Ribbon and occasions such as this, are making a wonderful contribution in raising the matter so prominently.

During my term as the Chief of your Army I have had the distinct pleasure of working side-by-side with some of Australia’s most innovative and dynamic business leaders. I know from these experiences that Australian workplaces approach issues that affect them or their employees with pragmatism and common sense; acknowledging when they do, that what occurs outside the workplace can also have an impact on what happens within it. Yet, one issue that Australian workplaces have been slow to address is violence against women.

It’s not that business leaders don’t think violence is an important issue – it’s that many of us don’t always think of it as a workplace issue. It is often assumed that domestic and family violence, and the workplace, are mutually exclusive; that one has little or nothing to do with the other.

However, it is a fact that the vast majority of women affected by violence in this country are in some form of paid employment. This equates to around 800,000 women – enough to fill the Adelaide Oval 15 times over. Something to think about while we are watching the cricket this summer.

It’s a workplace issue because in the most cut and dried manner it directly impacts on the bottom line. Decreased staff performance, high turnover and absenteeism are all are direct, measureable impacts.

But of course, the work environment is not so black and white: employee health and wellbeing also subtly improves workplace culture and employee satisfaction. If we, leaders in the workplace, offer clear policies and procedures and clearly communicate to our employees that they are not alone; that disclosing their circumstances will not result in adverse consequences at work, then we are taking positive steps to address the issue.

And for us, the men of Australia? Well here is the really hard part. It is not enough to just abstain from hurting women; from treating them as sexual objects rather than as people with an innate right to lead a dignified life. It is not enough to refrain from distributing foul images or stories that attack the well being of others.

No, the really hard part is to do all of that as well as ensuring that we are not bystanders when such things do happen. This means not shrouding ourselves in the comfortable shades of grey that comprise the passive acquiescence of the malevolent acts of others. It requires us to recognise that the standard you walk past is the standard you accept and that you are judged not just on your actions, but on how you allow others to act.

This call to arms is daunting. It requires drawing on the most special of all human qualities – moral courage. I have failed at times in my life to apply it when it was needed and I am bitter, on reflection, that I did not. I certainly don’t ask of anyone to be perfect. How could I when I am so imperfect? But I am implacable in my resolve to be better and so should all of us.

The world awaits our contribution. It desperately needs our idealism and our energy. Let us together make sure that Australians learn that the question they should be asking is not “Why does she stay?” but rather “Why isn’t he stopped?”

Photo: Students from Hawker College who attended the launch of the revamped Relationship Things in October.