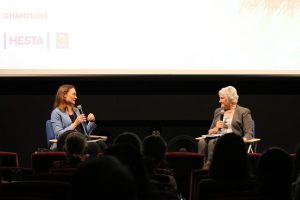 In October 2020, New Zealand elected its most diverse parliament ever, with women representing 48 per cent, Maori 13 per cent, and LGBTQIA+ 10 per cent. Jacinda Ardern’s strong yet empathetic approach to COVID-19 has also started conversations around women’s leadership styles in response to the crisis.

She was joined in conversation on 24 November by Hannah Birdsey, Assistant Secretary of Governance, Fragility and Water at the Department of Foreign Affairs and Trade (DFAT), with a wide-ranging discussion on the importance of diversity and how to pursue a leadership journey.

Hannah began by raising the excellent work of NZ in acknowledging and celebrating First Nations voices, traditions and cultures. Dame King explained how the approach in NZ had developed in the last fifty years into a mature understanding of NZ’s place in the world and the significance of recognising culture. “We needed to be a bi-cultural country before anything else.”

She attributed the ability to do this somewhat to the size of NZ and that, being a soft power, it made standing up for principles a key part of the national identity and political structure.

On the topic of diversity in the new NZ parliament, Dame King attributed it to a change in the voting system that ensured more diverse groups were represented and encouraged more collaboration through coalition governments, combined with deliberate affirmative action in the NZ Labour Party. She reflected that, although both extremely controversial, these measures had achieved a “true house of representatives”.

The conversation then moved towards what diversity really meant. Hannah raised the difference between recognising diversity and true inclusion of diverse voices, highlighting the importance of taking that step so that change is more than just performative. 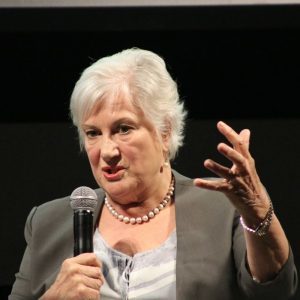 Dame King’s said that she has been pleased to watch this increase in diversity throughout her political career, because it was very different when she became what she called an “accidental politician”. At the time, she had only intended to join a march on parliament to demand a pay increase for school dental nurses, an underpaid, female-dominated sector. “I was petrified because I’d never been on a march in my life.”

But when that demand was granted almost immediately upon the arrival at parliament, a passion grew. Dame King studied political science and joined the Labour Party. She was put forward for a safe conservative seat as part of a push for more women candidates in the Labour party. To her surprise, she was elected!

Although she was scared at the time, Dame King now appreciates that she was pushed into a leadership role before she considered herself ready. She encourages women to put themselves forward, and to push other women to take up opportunities.

“The more women’s voices that we can have speaking up for women, in all walks of life, and in leadership roles, the better.”

One of the key take-aways of the evening was the importance of mentoring and support networks. Both Hannah and Dame King raised the significance of friends, family and colleagues who enabled them to achieve their leadership goals, especially as working mothers, and urged the audience to actively find mentors and support networks.

“I was almost a lost soul when I started,” Dame King reflected. But women mentors like Helen Clarke and Dame Fran Wilde helped her grow and develop, and she has now returned that by being a mentor to men and women. 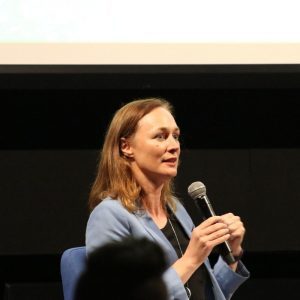 Of course, Hannah couldn’t resist a conversation on Jacinda Ardern’s leadership. However, she pondered whether the openness, vulnerability and empathy so many of us love about the NZ PM could be a risky approach given the inherent sexism still prevalent in western societies.

But in Dame King’s view, Jacinda couldn’t be any other way. “What you see is what she is. She knows what she wants, states her goals and works to them.” Dame King again raised the importance of support networks, noting the significant support Jacinda receives from her friends and family to enable her to pursue her commitments.

This determination, combined with a sense of warmth and empathy, was highlighted in her successful response the COVID-19 crisis. Dame King put this success down to a combination of decisiveness and strong, authentic communication that truly brought the community into the discussion.

The night ended on a very optimistic note, with Dame King opining that young people today already have the leadership skills they need to succeed: they are passionate, are prioritising a positive vision of the future, and are vocal. “They’re ready,” Dame King said. “It’s their turn to make their decisions and their mistakes.”

Thanks to our partners, Kambri at ANU and HESTA, without whom we wouldn’t have been able to hold such an inspiring and thought-provoking event.