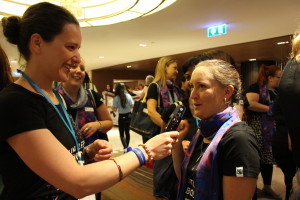 Sam being interviewed by Heidi, on day one of World Council.

A delegation of YWCA Canberra members, Board Directors and staff are currently at the 28th World YWCA Council in Bangkok, Thailand, as part of the YWCA Australia delegation. They will be participating in knowledge sharing, collaborating, and setting the strategic directions for the movement for the next four years. We’ll be sharing their reflections and experiences through our blog. Today, we hear from Samantha Betts.

It was a slow start to the day today, as yesterday was a big one – confronting yet inspiring workshops about forced and early marriage, sexual health and reproductive rights, peace and conflict, domestic violence, and political and economic exclusion.
In the spirit of ‘work/life’ balance, (or should that be work/tourism balance?), the Canberra delegates went for dinner at the famous Bangkok restaurant Jim Thompsons, the legacy building and cultural experience left behind by the American silk trader in the 1950-60s. Over dinner we discussed our experiences of World Council so far, the learnings from the workshops, and our aspirations for Canberra.

Her leadership journey from humble beginnings as a Canberra member highlights the leadership with YWCA Australia, and the global movement. If you believe you can, and create your own opportunities through seeking leadership and mentoring, you too can have a similar journey – whether it’s in the Y, another community organisation or in your professional field. The World YWCA’s current President, Deborah Thomas-Austin, was re-elected.

The business meeting also included changes to the constitution, including calls for the World YWCA Board and committees to appoint women from unrepresented countries, and include quotas for young women under 30.  Changes to the constitution are a big change for a global organisation. At least 10 separate countries spoke to the amendments – some for, some against, some requesting amendments to amendments. The process was long, but a great process to witness. It demonstrates that what may be good for one is not good for all, and that people’s views and insights into how changes will operate in practice are important to listen to from the very beginning.

We also had an introduction to resolutions – resolutions are long term commitments to certain priorities, becoming a major statement on policy which is to be adopted by all member associations globally.

We all had to giggle when our Australian Executive Officer Caroline Lambert started to formally speak to the Australian/Canadian resolution on an advocacy plan with ‘Gday!’. This resolution will ensure the YWCA presence on the world advocacy stage is strong, and consistent across the globe.

Women from Japan and Korea spoke to their resolution about nuclear weapons. In light of Fukushima in 2011, a call for the YWCA to formalise a statement and policy position on the ban of nuclear energy was made. This is an extension of widely recognised UN positions on nuclear weapons and women’s rights. The call for nuclear energy concerns women’s rights, in not only peace and security, but a generational sense also – our sexual and reproductive health rights, and the risk of maternal contamination when exposed to the radiation.

Women (particularly those who are pregnant) absorb radiation twice as much as men, and children as high as four times. It takes 2000 years for high levels of radiation to disintegrate – 2000 years. This is a pertinent resolution for Australia as our lobbyists and politicians explore options to coal.

Great Britain (GB) and Haiti called for advances on anti-discrimination, and at the Young Women’s Forum, we discovered that some member associations are inadvertently not adhering to YWCA’s anti-discrimination policy, which was formalised in 1995, and amended in 2014. GB and Haiti call for inclusion of LGBTQI rights into this policy, and a reinforcement of eliminating all forms of discrimination, in the YWCA movement, in our countries and in our communities.

For more info on the resolutions, including the background papers visit the World YWCA Council website.

After the resolutions were the Calls to Action (areas of importance that  come up after the formal resolutions have been submitted). The first one was one that, as a young woman, I supported. All the young women were called up to the stage (almost 200 of us). The call to action was to ensure that  all Y’s around the world actively support young women’s leadership on their Boards, and strive for a 25 per cent representation of young women on their boards. The complete call to action document will be on the World YWCA website by the end of the week. Siobhan from YWCA Broken Hill summed up the moment beautifully – “Powerful… it shows the rest of the movement how serious everyone is [about this call to action].”

The second call to action was regarding women and peace in the Middle East. Palestine, Jordan and Lebanon (with 16 supporting countries) put forward a request for the YWCA movement to support partnerships, peace building, and supporting programs for those impacted by conflict, violence and displacement. Their sentiment was strong yet thoughtful –”We are putting this council to a test – to support human rights and women’s justice”.

After the business meeting, resolutions, and calls to action, the delegation broke for workshops. I joined  a workshop hosted by Kenya on the emancipation of girls and young women from harmful traditional practices, such as child marriage, female genital mutilation (FGM), early pregnancies and restriction to education.

FGM is illegal in Kenya, being prohibited by law in 2011, yet the practice still continues. One girl is harmed by FGM every ten seconds. I was shocked and I hope you are too. The confronting stories were essential to hear as a young woman. Hearing that girls as young as three-years-old are  undergoing this process in a lucrative and exploitative cultural practice made me mad.

We’re hearing a lot of human rights and women’s rights abuses throughout World Council but this is not just women’s rights violations, it’s child abuse. A small child should never have to be tied down by her family and have her clitoris and labia minora cut out, and her labia majora sewn together – all without sterilisation or pain relief. Women sing and celebrate this ‘coming into womanhood’ to muffle the screams of the child. YWCA of Kenya are combating this issue through economic empowerment, girls education and generational advocacy – to quote one woman who told her story, “I will  not let this  happen to my nieces or my daughters”.

To end the blog on a less confronting tone, I will say this – from anger comes determination, and from sadness comes strength. Whether it be FGM, conflict and war, or discrimination, together we can climb this insurmountable mountain, one step at a time.

It’s been a whirlwind of a day – thanks for reading!