Sharing Our lives with the Canberra community

We were honoured this week to launch our new report, Our Lives: Women in the ACT. This report, based on a survey we conducted of over 1000 Canberra women, provides insights into the daily lives of women in the Territory.

We were joined by around 40 members of the community including MLAs, MPs, community sector organisations and advocates, as well as YWCA Canberra members, at our official launch at the Legislative Assembly on 29 October. The launch was hosted by RiotACT journalist Genevieve Jacobs and featured a Welcome to Country by Ngunnawal Elder Aunty Violet.

To capture the breadth of ages reflected in our survey findings and the dynamics of women’s lives as they age, the event also featured a panel of four local women, at various stages of their lives and careers.

Our panel members were: 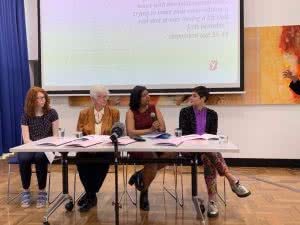 The report’s findings on perceptions of personal safety in the ACT drew a great deal of discussion from the panel, as did findings regarding financial security and independence.  Marie, who has spent decades working to advance women’s economic inequality noted how for years the economic status of women was tied up in their marriage—“you were expected to stay married and therefore be dependent on your partner as you aged”—an expectation that effectively left many older women impoverished as they outlived their spouses or got divorced.

Tulika explained how income inequality today can result in women being trapped in unhappy relationships or tolerating abuse. Tulika also noted that for women from non-English speaking migrant backgrounds, who are often not able to drive and not financially comfortable, are left to struggle with Canberra’s public transport system from the city’s fringes where housing costs are cheaper. This blending of cultural norms and financial insecurity can impact on culturally diverse women, isolating them from community support or social networks others take for granted.

Matilda, our impressive young panellist from Dickson College, said she wasn’t surprised by the report’s findings that young women are disproportionately at risk of abuse and sexism. She also noted that young women are acutely aware of how their gender may impact their future with some peers already considering whether they will be able to afford to buy a house or have children. Her thoughts were also reflected in comments provided in our survey, with one young respondent noting “I hope that paying for a house doesn’t mean I can’t save for my retirement”.

According to Matilda, sexism, cat calls and intimidation are regular occurrences for young women in the ACT, which she believes is leading to the reports finding that 72 per cent of women age 18 to 24 in Canberra feel unsafe in public spaces at night.

But things aren’t all so bad. Romy reflected on the recent rise in young women activities and their awareness of their rights. “I have enormous hope for the future that so many young women are so engaged and involved in politics,” Romy said.

And a final word to Marie Coleman, who called for greater data collection to provide a better understanding of how households spend their time, including as a means to highlight the disproportionate amount of unpaid labour women perform. In the style of a woman who has spent decades advocating for women, Marie wrapped it up with some timeless advice: “In the end it comes down to persistence—don’t give the buggers an inch.”