She Acts – Women After Dark

Do you have an after dark safety ritual? On the phone, keys in hand, walking on the street instead of the dimly lit footpaths? Well, you’re not alone and that’s part of the problem.

Last month She Acts, YWCA Canberra’s volunteer group, held an important conversation around the perceptions and realities of safety and accessibility for women, including female and non-binary people, in Canberra community spaces after dark. 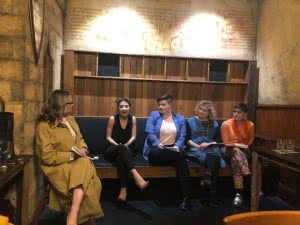 With incredible diversity on the panel came new perspectives and understandings of the unique challenges women face on a day-to-day basis. Cee illustrated the difference between accessibility in theory and in practice, highlighting the number of disability entrances to buildings which are located down alleyways, in unlit spaces or separated in other ways from non-accessible entrances.

The group discussed how perceptions and realities reinforce each other. The perception that women are not safe at night means less women are accessing public spaces. With less women in the space, negatives perceptions of safety are reinforced. The panel agreed that people’s perception of safety is boosted in a space when they see people like themselves using or reflected in that space.

Much of the discussion emphasised the need to seek intersectional perspectives when spaces are being designed, and how it can be just as easy to get it wrong as it is to get it right.

After the final story was shared, we all left the venue and went out into the dark with new understandings, new perspectives and feeling less alone in our shared experiences.

If you have an idea for the next She Acts panel or want to get involved, get in touch with us on Facebook at She Acts (Canberra).

She Acts is the volunteer forum for members and friends of YWCA Canberra, building the YWCA Canberra community through events, fundraising campaigns, and member and supporter engagement projects.