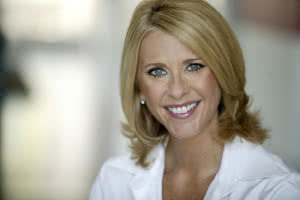 In the lead up to this year’s She Leads Conference, taking place on Tuesday 19 May at Hotel Realm, we’ll be giving you the chance to get to know our speakers. Today, meet our MC Tracey Spicer. Tracey is one of the most versatile journalists and presenters in the country, with a portfolio spanning television, radio, newspapers, magazines, and online media. During her 25-year career, she has anchored news, current affairs and lifestyle programs in Sydney, Melbourne and Brisbane.

Currently, Tracey works as an anchor for Sky News, weekly columnist for Fairfax Media and The Hoopla, radio broadcaster, and presentation trainer at the Australian Film, Television and Radio School.

I’m a writer, broadcaster and journalist. Currently, I work for Fairfax newspapers, Sky News, and the Australian Film, TV and Radio School. I also conduct media and presentation training through my company, Spicer Communications. Most importantly, I’m a feminist.

Tell us about a moment in your life that defined your leadership style.

Leading doesn’t come naturally to me. Not because of gender, I hasten to add! More to do with my personality. However, once I discovered that every leader has been on her or his own journey, I started working on my style. It’s extremely collaborative.

What opportunity for yourself are you most excited about in 2015?

I’m excited about building the mentoring, networking, and lobbying group Women in Media, which I convene.

Recommend a book to other women that you’ve found influential on your leadership/career journey.

What do you consider to be the biggest issue facing gender equality?

The biggest issue facing gender equality is the current backlash. We are making great leaps forward. This is threatening to vested interests.