She Leads 2018: Reigniting the revolution

There is nothing more powerful than a room full of women who have got each other’s backs.

Last week, the annual YWCA Canberra She Leads conference brought together some of Australia’s most intelligent, insightful, generous and funny women for a day of learning and sharing how we can be better leaders at the Rex Hotel. Centered around the theme ‘Rise: We grow powerful by lifting each other’, the conference proved that there is no one way to be a leader, whether at work or in the wider community.

Jamila Rizvi, presenter, political commentator and author of Not Just Lucky, was the first keynote speaker of the conference. She explained the way women are forced to choose between two alternatives: being successful or being likeable. Qualities that are seen as positive in men, like ambition and drive, are criticised in women. So we try to minimise our achievements, by attributing our success to luck. 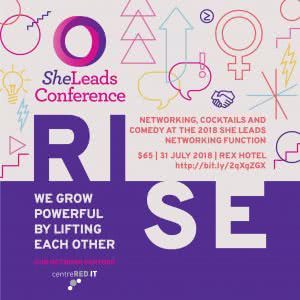 Like Cate Blanchett, Lisa Wilkinson, Nicola Roxon and Sheryl Sandberg, we say we were just in the right place at the right time. Jamila argued that this lack of confidence is not only damaging our own lives, it also hinders the women who could otherwise follow our footsteps. So we need to admit to ourselves and others that we’re not just lucky, we’re brilliant.

The conference also featured two fascinating panels that brought together women from diverse backgrounds to discuss how they became leaders and the structural changes required to empower even more women. Dr Vanessa Lee, a senior researcher in epidemiology, and Natalie Walker, the founder and managing director of Inside Policy, were able to offer particular insight into the barriers facing Aboriginal and Torre Strait Islander women in Australia.

Bridget Clinch, whose activism for trans rights changed the Australian Defence Force, explained how she became a leader by default. Her advice for those reluctant leaders? Listen, learn and grow.

Triple J presenter Nas Campanella was another clear favourite with the crowd as she shared her journey to becoming on of the most recognisable voices in the country (despite her assurances that in private she sounds like a complete bogan.)

Nas has been blind she she was six months old, and struggled to read braille in school until a teacher realised she also has a genetic disease called Charcot-Marie-Tooth. This that means she also has a near-total lack of sensitivity in her fingers. Once she found a program called Jaws, which translates electronic text to audio, a whole new world opened up for her.

In the face of discrimination in the workplace, Nas has built a hugely successful career in radio and a full, independent life. Unsurprisingly, it was inspirational just to be in the same room as Nas as she redefines what is considered possible.

The afternoon finished up with a practical guide from Mary Delahunty, Head of Impact for industry superannuation fund HESTA. After promising not to bore us with her favourite topic (superannuation, of course), Mary used the words of American professional tennis player and AIDS activist Arthur Ashe to break down the process of effecting positive change into three steps: “Start where you are, use what you have, do what you can.”

Mary emphasised that we can all create space for more women leaders in our own lives. After an audience request, she also explained how superannuation policies and behaviours need to change to truly value the contributions women make to bring us closer to economic equality.

Meshel Laurie, who guided us through the conference as the hilarious MC, also gave a couple of pieces of advice on how to best support your sisters. Firstly, if you feel yourself getting jealous of another woman’s success, just tell her how amazing she is and the jealousy will lose all its power. Secondly, if you want to make your ambitions a reality, you’ve got to tell share them with the world so people can support you.

And with that, a day full of laughter, inspiration and delicious scones wrapped up for another year. But never fear, the She Leads Conference it is only one of many amazing YWCA events held in Canberra, so there are plenty of opportunities to stay connected. Together, we will rise.

This article was originally published by HerCanberra and has been republished here with permission.