She Leads the way for Canberra women 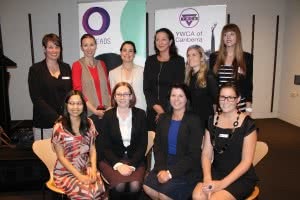 This article was first published on HerCanberra on March 26, 2014

We all endeavour to kick start a new year with fresh ambitions; to progress further in our career, ask for that well-earned pay rise or simply put our hand up for more responsibility. But before you know it January has turned into February, February into school holidays and you’re well on your way to seeing the back of June.

The determination to step up starts to dissipate and the confidence you once had seeps away as other priorities start to fill its place, and you realise that your goal to be more of a leader will have to wait for yet another year.

Two weeks ago, I had the pleasure of attending the launch of the YWCA of Canberra’s She Leads 2014 program and learnt that it’s not so much about finding the time for leadership, but rather trusting your own values and abilities.

We need only look to Julia Gillard’s experience as Australia’s first female Prime Minister to see how isolating and lonely leadership can be. Every day, for three years, she faced the onslaught of Parliament and the microscopic scrutiny of the Press for being a woman in politics.

Yet she survived, but why?

As YWCA of Canberra Executive Director, Frances Crimmins shared with a group of 90 women; it’s about standing by your beliefs—a truth that many successful women live by.

“When you put yourself out there you have to be prepared that people won’t always agree with you,” says Francis.

“Knowing your values and being true to them can help leaders negotiate the hurdles and barriers in their pathway.”

Federal member for Canberra, Gai Brodtmann officially launched the 2014 She Leads program, which will include the inaugural She Leads conference next month and a year-long Diploma of Management tailored specifically to women.

Openly rejecting two (very) hairy chested notions often associated with what it takes to be a leader— don’t wear pink and learn to play golf— Gai claimed that throughout her leadership journey, she has definitely worn her fair share of the overly stereotyped gender cue and never liked the ‘thinking man’s game’ anyway.

Instead, the MP identified decency as the much-needed quality to make a good leader and allowing failure to be your teacher, not your undertaker while offering up some truthful advice.

“There are always going to be haters but take it with a grain of salt,” she says.

“Be gentle with yourself; take criticism but not personally. Have an educated opinion but an opinion that is considered, and don’t be shy in sharing that opinion.”

It is perhaps the last sliver of Gai’s advice that resonates with many Canberran women…well…most likely all women. Too often we hold ourselves back from sharing an idea, challenging an opinion or presenting a new direction only to find ourselves in a position of chronic uncertainty, anxiety or, at a later stage, regret for not speaking up when we had the chance.

We go with the flow in a passive and docile manner, and sometimes give in to self-defeating behaviours. It can be difficult to stand up for yourself and be assertive, particularly in a male-dominated environment.

Having travelled to Gaza, Lebanon, Syria, Iraq, Egypt, Israel, and Jordan, and sharing more than just insight into how she began her life as a reporter at the young age of 15, award-winning journalist Sophie McNeill admits that her biggest challenge of all was not working in war-torn countries as a female reporter; it was realising that gender inequality is alive and well in her very own backyard.

“I never really thought about being a woman until I went to the Middle East,” she confesses.

“It was actually an advantage [because] I was treated as an honorary man. It meant I could interview men and women. I came back to Australia to try and have children and a career, and suddenly I was faced with all these issues about my gender.”

Invaluable in accelerating the career progression and leadership roles of women, the She Leads program aims to provide young women with a safe space to have leadership conversations.

“We believe that leadership should be transformational and intergenerational,” she says.

“By creating a safe and enabling environment for young women to deconstruct notions of leadership, they are able to explore and experiment with new leadership concepts, and build new leadership skills and confidence outside of gendered roles and expectations.

Taking place on 13 May at Hotel Realm, the She Leads Conference will feature a line up of renowned Australian women to inspire and motivate participants including author, journalist and pioneering Feminist Anne Summers, Executive Director of UN Women Australia, Julie McKay and Deputy Secretary Defence People in the Department of Defence, Carmel McGregor.

The YWCA of Canberra acknowledges that women at the beginning of their careers are not always in a position to fund their participation in programs such as She Leads, and has partnered with Westpac and Zonta Canberra Chapter to offer three conference scholarships. But before you apply, YWCA of Canberra encourages you to explore all possible options such as asking your employer or applying for a small grant.

What: She Leads Conference
When: Tuesday 13 May, 2014
Where: Hotel Realm, Barton
Tickets: Various ticket options available at YWCA of Canberra
Expressions of interest: for the She Leads Diploma of Management can be directed to Joanna.Allebone@ywca-canberra.org.au