Slacktivism and becoming a better ally with Sally Rugg

Our She Leads In-Conversation events provide Canberrans with the opportunity to hear from women leaders from different backgrounds and industries, in a conversational format, followed by a live Q&A session and networking.

The She Leads In-Conversation with Sally Rugg was facilitated by Isabel Mudford on the 26 February 2019 at the Ann Harding Conference Centre, University of Canberra.

Sally Rugg remembers the first wedding she attended after the marriage equality law was enacted.

“You’re so used to hearing the [marriage act] phrase ‘one man, one woman to the exclusion of all others’ echoed within the celebrant’s words – which feels like, to the exclusion of me,” Sally recalled. “So, for the first time when I heard those words updated, I burst into tears and it wasn’t even my wedding!” 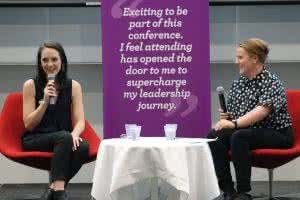 To Sally, the prominent LGBTIQ activist who is best known as a key figure in the ‘Yes’ campaign during the 2017 postal survey for marriage equality, the results of the survey “meant the world…it meant acceptance, celebration, inclusion.”

There has been a huge shift in public support for marriage equality, wherein figures transformed in 2004 from just 38 per cent in favour of marriage equality to 57 per cent in favour in 2007. This majority vote was retained for 10 years, only building in 2012 when the social issue-based organisation GetUp! began campaigning with the advocacy group Australian Marriage Equality (AME). Sally took on her role as the Campaign Director at GetUp! in 2013, which gave her a platform to further drive the campaign to success. For Sally, seeing the surge in public support for marriage equality was more exciting than any wedding could ever be.

When discussing how ‘Yes’ campaigners successfully won over the Australian public, Sally said that a key strategy was to “appeal to people’s humanity, through incorporating language such as, ‘this could be your brother, your sister, your son and so forth.’” Sally commented on how she believed that although this is something that shouldn’t be necessary, it was a strategy that worked to increase the number of allies who then took the cause on as their own.

“The cool thing about queer people is that we’re like sleeper cells, ready to be mobilised for a cause, every ally knew someone who was LGBTIQ and that made the difference,” Sally joked to the crowd. In a more serious tone, she added, “but we need to mobilise that same connection for genuine reconciliation with our First Nations people…. broad allyship should not just be because it affects your father, sister etc.” Sally continued to explain the way Australia poorly manages disadvantaged minority groups in society is a result of our national inability to confront our colonial past. She emphasized how in order to change this and tackle Indigenous issues, it is imperative that the Australian public become stronger allies to Aboriginal and Torres Strait Islander people. 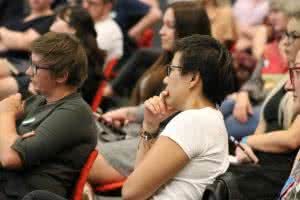 Online activism, fondly referred to as ‘slacktivism’ by many sceptics, was, in fact, one of the main tools employed by allies and campaigners in order to create cultural change surrounding the marriage equality debate. When asked by Isabel about her opinion on the criticism activists face for online campaigning and the term ‘slacktivism’, Sally responded that “‘Slacktivism’ is a term used by the people in power to undermine how ordinary people engage in organising in their everyday life….it is used to undermine their work.” She explained how this criticism of online campaigning is naïve to the power of modern communication and means of the way in which people organise in 2019.

This is one of the reasons why Sally said she enjoys her current position as the Executive Director of the online petition and campaigning website Change.org. Sally reflected on how the website is often the last resort for everyday people who have been let down by institutions and systems that have failed them. It provides them with an alternative method to seek out and obtain justice.

Sally is no stranger to receiving unproductive criticism. This is something she has become accustomed to from those who were, and are, against the marriage equality and LGBTIQ movement.

When asked how she manages to stay calm and friendly in past interviews with people who have expressed their disagreement in a less than savoury manner, Sally said “I’ve had to work on being calm in the face of acrimony. Anger just wasn’t an option when we were trying to get ordinary people out to vote.” Sally outlined how often, people who sit on the fence for certain social issues are deterred by anger. Therefore, by maintaining a positive ‘kill them with kindness’ attitude, she has been able to become more successful in influencing the public vote. 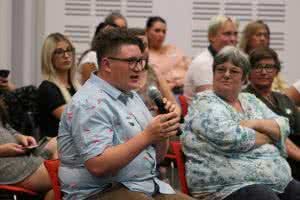 That is not to say that Sally believes there is no place for constructive criticism in activism. In fact, Sally welcomes it. “If you are afforded a position and a platform [to talk] you’ve got to be criticised… we as activists and leaders need to take on more perspectives and be held accountable, otherwise, we are no worse than the power structures that we are trying to dismantle.” Sally said. She explained that at first, it was hard for her to receive criticism, however, now she tries not to take it personally and instead builds feedback into her learning process to become a stronger leader in society.

As the conversation concluded, the floor was opened to questions from the audience. One member of the audience asked Sally how activists should address inter-violence in the queer community such as violence against, and the exclusion of, trans people. To this Sally responded that in order to be activists in the space, people cannot simply leave the educating to trans people alone. She reiterated that in order to address social issues such as anti-transgender violence, activists must take on the responsibility as their own. They must call out anti-trans behaviour, educate people and work to become better allies. To Sally, allyship is the key to creating social change and in turn, a more equal society. 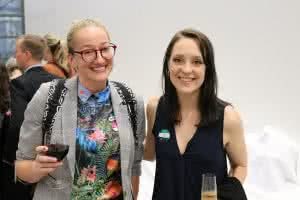