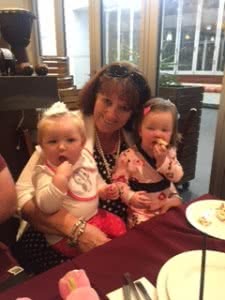 Can you tell us a bit about your role at YWCA Canberra?
I have been working with the YWCA Canberra since July 2000. I started in Family Day Care as an administration assistant and worked my way up to the managers role, which I held from 2006 to 2010. I then moved into the Children’s Services Coordination Unit into my present role. I have been involved in children’s services for over 30 years in varies roles, starting in early childhood then in family day care when I had our four children.

What is the scariest thing you’ve done in the past few years?
Getting that dreaded phone call in the middle of the night to say your son is stuck in a vehicle that has tipped over, arriving on the scene to see paramedics working on your son before he was taken to hospital. Then following the ambulance to the hospital and later to be told he is brain dead. Kyall wanted to donate his organs if anything ever happened to him, so it was an easy decision to make when we were asked the question. Kyall donated nine organs to eight recipients ranging from a six-year-old girl to a 70-year-old woman.

What’s on your current playlist?
Whatever is on the radio while driving to work.

What is the most out-there job you’ve ever had?
Running our own business called The Old Train Stop in Gundagai at the Dog on the Tucker Box snake gully with four small children. We ran a restaurant and fuel stop business out of three train carriages while living in a fourth carriage.

If you had to choose a single thing about the Y that makes you proud to work here, what would it be?
It has been a pleasure to work with a great diverse range of women over the last 15 years.

When you’re not at work, what’s your relaxation activity of choice?
Spending time with family, my two granddaughters and friends. I enjoy knitting, sewing, shopping for my granddaughters, and weekends at the coast with my husband.

Who’s your favourite inspirational woman?
Malala Yousafzai. She is an advocate for women’s rights, especially the right to an education. My husband and I have been supporting a family in Cambodia with four children over the last four years. We pay for the older two boys to go through university and we are paying for the young girl to finish high school and college so she didn’t have to leave school in year nine and work in a sweat shop in Phnom Penh away from her family. We will do the same for the youngest girl when she finishes year nine in four years.