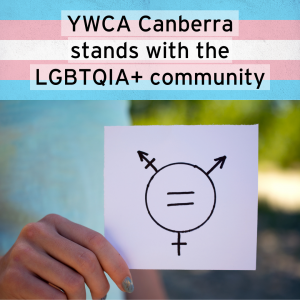 YWCA Canberra proudly stands with the LGBTQIA+ community and calls upon members of the Australian Parliament to exercise their vote in support of trans and gender-diverse people.

In 2017 with a convincing majority, Australians voted to support same-sex marriage. A journey that had taken decades of lobbying and inconceivable trauma ended in a national celebration that brought together families, neighbours, and communities.

YWCA Canberra supported marriage equality then and we support the rights of trans and gender-diverse people today.

Nearly five years later, the Religious Discrimination Bill has the potential to send us backward by entrenching discrimination, rather than protecting against it. Of particular concern, are those provisions in the Bill which will effectively give license to individuals and organisations of faith to openly discriminate so long as offensive or controversial statements are made in ‘good faith. It is abundantly clear that those likely to be most impacted by the consequences of this Bill will be gender-diverse young people forging their own unique path in the world.

In 2015, YWCA Canberra established a collective for young gender-diverse people. The ‘A-Z Group’ offers an opportunity and safe space for people age 12 to 25 to present as their authentic selves, harness collective support, hear from guest speakers and socialise. What this group has achieved should be a beacon for inclusive spaces: young people, their allies and families are welcomed into the wider LGBTQIA+ community and are supported to change the landscape of services for young queer people in Canberra.

In our 90-year history, YWCA Canberra has been an ally to all who have walked through our doors in need of support, regardless of religion, gender or cultural identity or disability, and we will proudly continue our work to help build a city where diversity is a collective, indivisible strength.