At YWCA Canberra, we are dedicated to building a pipeline of qualified and confident early childhood education and care (ECEC) professionals as part of our work to address gender inequality. That’s why our registered training organisation (RTO1373) offers the latest Certificate III and Diploma qualifications in ECEC.

We believe the quality of our training is demonstrated best in the words of students. Here is Leena’s story. 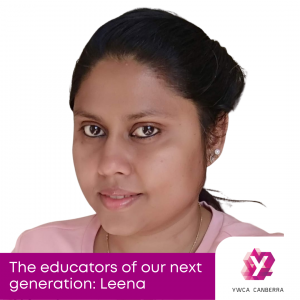 Before moving to Australia from India, Leena had an established career in human resources. But the profession she had started 11 years beforehand no longer suited her life as a mother of two children. So, she took her new start in a new country as an opportunity to explore a career change and started thinking about occupations that would benefit her whole life.

“When I had my children, I realised that I wasn’t quite prepared to handle them. Children are little people with their own mind and personalities. I wanted to understand them better so that I could be a better parent, so I thought [a career in the early childhood sector] would help me both ways.”

Not knowing much about the sector, Leena decided to learn more. One day, after dropping her older son off at school, she stopped by a YWCA Canberra early childhood service next door to ask about career pathways. The Director informed Leena of the qualification requirements to be an early childhood educator in Australia.

Two and a half years later, having completed both a Certificate III and Diploma in Early Childhood Education and Care, Leena is now happily established as a Room Leader—at that very same service!

It wasn’t always an easy journey, and Leena initially had concerns about going back to study.

“I had never studied in Australia, it was all back in India, so I wasn’t sure how it was going to pan out. I initially wanted to do a Bachelor degree, but that was four years long, and I didn’t know if I would be able to give that kind of commitment. So I thought, let me take baby steps and do my Certificate III. And if I’m happy, and I enjoy the work with children, then I’ll probably go on to do my Diploma as well.”

It turns out she loves working with children and did the Diploma.

But it almost didn’t happen. Just as Leena was about to enrol to study her Certificate III with YWCA Canberra, an illness in the family took her back to India. She thought she would have to miss out on enrolling, but YWCA Canberra’s Education and Training Unit Coordinator took care of it all for her. “Vicki was able to enrol me, and everything happened while I was in India, which was a great support.”

Once back in Australia, Leena’s studies provided a new support network for her. Even though her classes included people of a wide range of ages and backgrounds, including some fresh out of school while Leena was returning to study in her mid-30s, she never felt left out.

“The best part about the training was that there was so much support. It was not only the trainers but also the group of students that I studied with. It was a really enriching experience for me.”

This support network came to the fore when Leena had family issues while studying her Diploma. But because she had developed a relationship with her trainer, she felt comfortable seeking help.

“I was really not coping very well with my studies and other things. I was really stressed and felt that maybe it had been a mistake to do the Diploma. Maybe I wouldn’t be able to finish it. But just speaking to Daisy and discussing my situation got me to relax.”

Daisy, YWCA Canberra ECEC trainer, encouraged Leena to take the time she needed, then helped her get back on track with her studies once her issues were resolved. With Daisy’s support, Leena managed to finish her Diploma on time.

Throughout the course, Leena learnt a lot more than she was expecting, which opened her eyes to the professionalism of the early childhood sector.

“There’s so many technical things. There are rules, regulations and laws around it. It’s not just feeding, cleaning and taking care of the children. There’s a whole process of overall development that we look into.”

Leena’s favourite part of this educational aspect that underlies her career is watching children develop their autonomy.

“Children who attend early childhood services become so much independent, and they’re quite ready for school.”

She even noticed this in her own children, with her son who attended a service from an earlier age being more independent.

Although it’s a far cry from HR desk work, Leena couldn’t be happier with her new profession and is looking forward to a long career in the early childhood sector.