At YWCA Canberra, we are dedicated to building a pipeline of qualified and confident early childhood education and care (ECEC) professionals as part of our work to address gender inequality. That’s why our registered training organisation (RTO1373) offers the latest Certificate III and Diploma qualifications in ECEC.

We believe the quality of our training is demonstrated best in the words of students. Here is Leen’s story. 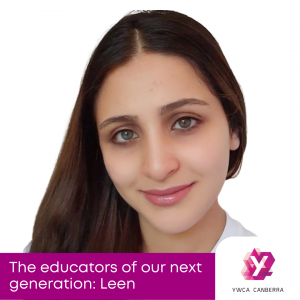 When Leen decided she needed a new career, it wasn’t easy. Having come to Australia three years ago on a Humanitarian visa with no English and little support, she had found her existing qualifications weren’t recognised. And with a young child, she couldn’t commit to days of in-person training each week.

Then a friend suggested that they both explore careers in ECEC and encouraged Leen to attend an information session at YWCA Canberra. Although Leen found the idea exciting, having taught in schools previously and loving working with children, she didn’t immediately start the course.

“I was hesitant to enrol at that time because I was pregnant. I delayed to the next year.” Thankfully her friend, who did enrol, loved the course and continued to encourage Leen to undertake the study. And when the time was right, Leen found she loved training in ECEC.

“It was easy, but at the same time it was comprehensive. They gave us everything we needed. I learnt so much!”

With two young children, there were still challenges, and Leen appreciated the flexibility of studying primarily by distance. “When I did the face-to-face classes, it was only every two weeks, and it was easy for me to manage everything.”

But there were still times when it was all a bit overwhelming.

“Because of my language skills, it was a bit harder. Sometimes I felt like I might give up, that I couldn’t do it or I will delay it. But when I sent an email to Daisy, my lovely trainer, she was encouraging me to continue.”

Leen was heartened by the support she received. “I was highly supported by my trainer and she was always giving me time and space to finish my course. [The YWCA Canberra trainers] are really supportive to diverse women, including older women and women without any previous training.”

And it wasn’t just the trainers that Leen found support in. With a diverse mix of students from many cultural and language backgrounds, she used her classes to practise her language skills. Both students and the trainers helped her practise.

That being said, Leen’s favourite part of her course was outside the classroom, putting theory into practice in her placement within an ECEC service. “When I practice with children with this principle or this learning story, when I achieve that, I feel proud that I did it.”

This experience also made Leen realise how young children think. Having previously taught year six children, she became fascinated by the differences in thinking styles in the first five years of life. “I was seeing what the children were thinking deeply about, children like my baby, [and it was] not what I was expecting!”

“I will always be grateful to YWCA Canberra and Daisy for your support and kindness. It would be impossible to count all the ways that you’ve helped me in my career. I only hope I can return the favor sometime in the future.

“I am looking forward to studying the Diploma of Early Childhood Education and Care with this thriving organisation, as well as encouraging the women I know who want to study early childhood to do so at YWCA Canberra.”

Daisy, Leen’s trainer, is proud to have supported Leen through this journey and to help her become a quality early childhood educator. 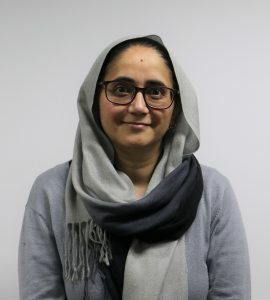 “My role is far more than just delivering the training package,” Daisy said.

“It is about helping a person become a good educator both academically and socially. It involves recognising people, like Leen, who have the capacity to work as an educator and supporting them to complete their qualifications.

“Being from a culturally and linguistically-diverse background myself, I feel I can provide holistic and empathetic support as a trainer. I work with the students in their whole lives, not just their studies.”

And Daisy appreciates the wide-ranging impact of her work. “I believe that, through this role, I can make a significant impact on the lives of both those I train and the children they will educate throughout their careers.

“I am proud to work for an organisation that provides culturally and linguistically diverse women, who represent the majority of our current student cohort, with accessible and inclusive training and education. This education leads to increased economic participation and empowers them throughout their entire life.”

Daisy’s approach and skills were recently recognised in the 2021 ACT Training awards, where she was a finalist in the ACT Teacher/Trainer of the Year category.

YWCA Canberra is proud to have inclusive, passionate and dedicated staff like Daisy, and excellent students like Leen, as part of our commitment to the ECEC sector.