The power of story

These events are in partnership with the University of Canberra, who like YWCA Canberra, are WGEA certified and share our vision of women’s empowerment. Through this, the University of Canberra provides flexible working and studying options for students and staff, is friendly breastfeeding certified, provides outreach for gender rebalance in STEM, and has a commitment from top-level executives for gender equality policies and services. YWCA Canberra is grateful and proud to be partnered with an institution that strongly aligns with our organisational values. 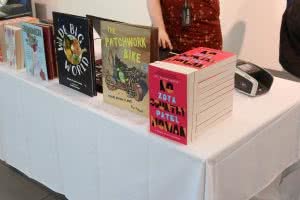 Storytelling is a powerful communication tool that has been incorporated by varying cultures across thousands of years. It can engage us in the experiences and perspectives of others and can help to shape how we personally see and experience the world. However, when diverse voices are not adequately represented and we are constantly presented with stories from the same perspectives, the power of storytelling is lost.

Maxine Beneba Clarke is an Australian born black writer of Afro-Caribbean descent who writes fiction, non-fiction and poetry. Sometimes Maxine writes about being a mother, other times she writes about race and politics. Regardless of what Maxine is writing about, her writing demands that diverse voices are centred. This was one of the countless reasons why so many of us were gathered at the University of Canberra’s Ann Harding Conference Centre on Friday 20 September, to listen to Maxine speak with fellow feminist writer, Zoya Patel.

Throughout the evening we were fortunate to experience an honest, humorous and insightful conversation between Maxine and Zoya. Maxine revealed her struggles with her critically acclaimed short fiction collection Foreign Soil, which she reminded us, was rejected by almost every Australian publishing house before it won the Victorian Premier’s Unpublished Manuscript Award in 2013. After this, Foreign Soil went on to win numerous awards and was even included in the 2018 Victorian Certificate of Education (VCE) syllabus; a testament to Maxine’s perseverance and talent. The book itself is a collection of short stories from the perspectives of varying marginalised characters that are both personal and political, exploring the nuances of privilege and power.

Maxine’s writing method incorporates cadence and tempo in her character’s speech which makes their stories come to life. This is unsurprising as Maxine has a history in spoken word poetry and is actively involved in the slam poetry community. Maxine revealed

to us however, that along her journey as a writer she didn’t always know she was going to be a poet, in fact, she never thought it was a possibility for her. “It’s really funny [looking back on slam poetry] I was really hard-line. I wouldn’t even write my poems down. I just turned up. I never thought it would be possible for someone like me to do poetry.” Maxine said.

Now, Maxine is the Saturday Paper’s poet laureate, where she creates a poem a week usually based on current Australian issues and topics. Maxine informed us that before this, she was writing creative portraits of various interesting people for The Saturday Paper for four years, something she grew tired of. One day, she suggested that they give her a weekly poetry column not thinking it would actually happen, but it did. She told us that she receives the topic on a Tuesday and must submit her final poem to publish on Thursday. “You realise what a mess this country is in by what kind of topics come up time and time again.” She laughed.

There’s a robust and symbiotic history between activism and poetry, especially spoken word. As Maxine’s work is inherently political, it may seem natural to deem her as an activist. However, Maxine divulged that she does not consider herself as an activist. When asked “do you find that people automatically assume you are an activist based on your writing?” she responded with “while my writing has a political message, I don’t see myself in the same way as those who are on the ground, actively doing the work.”

Alongside her writing and ever-growing public status, Maxine is also a mother, something which she mentioned is clear from her Twitter feed where she often provides anecdotes on humorous interactions with her children. “A lot of writers almost pretend they don’t have children, they just don’t talk about it,” she said, “the first time I started that conversation it was powerful for me. You can be a parent and feed your children with your art.” 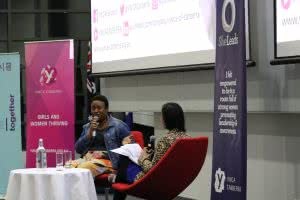 Maxine’s connection to her children encouraged her to delve into writing children’s books. She told us her book, Fashionista, was a direct response to the lack of books out there for children with English as their second language. “It’s a book about dressing up and not feeling like it needs to be in branded clothing or having to wear what everyone else is wearing.” Even through her children’s books, Maxine strives to provide stories from varied perspectives that engage a wider audience as a result.

Maxine Beneba Clarke has a way of telling stories with the power to leave an audience speechless which is exactly how Maxine chose to conclude the conversation. Without any notes, she recited one of her poems from The Saturday Paper that harrowingly portrays the fear surrounding gender-based violence issues faced by Australian women.

“The monsters are out” Maxine recited “and the women of Melbourne, we’re leaving early again…”. As Maxine finished, there was an audible silence until the room burst into resounding applause.

Rich and diverse storytelling helps to fuel activism by encouraging empathy and understanding. Maxine does not wish to take on the label as an activist, however perhaps it is safe to say that her writing actively enriches the work activists are doing across Australia.

You can read The monsters are out and other poems by Maxine Beneba Clarke via the Saturday Paper.