“Many people tell me to be patient, that change takes time and the next generation of Australia’s workforce will not tolerate sexual harassment” was how Australia’s Sex Discrimination Commissioner Kate Jenkins opened her address at the National Press Club on 12 September.

Launching the Human Rights Commission’s fourth national survey on sexual harassment in Australia’s workplaces, Commissioner Jenkins used her address to discuss the findings of the recent survey of more than 10,000 workers aged 15 to 65 across diverse locations and industries. Her message was clear; workplace harassment continues to be an endemic problem in Australian workplaces, young people and women are most at risk and that we cannot sit back and expect the next generation to stamp out harassment, as sexist attitudes are already evident amongst them. 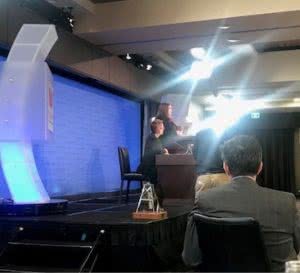 As she ran us through the findings, including anecdotes by survey participants, we learnt that far from being a behaviour that was on its way to history’s dustbin, rates of workplace sexual harassment are in fact increasing. One in three workers allege they were sexually harassed over the previous five years at their workplace, whereas previous national surveys put this rate at as low as one in ten. And worryingly, given the magnitude of the survey responses, many workers still believe that workplace harassment is only illegal and reportable when it contains elements of force or violence or has an underlying malicious intent.

Kate reminds us that any unwelcome behaviour of a sexual nature, whether a one-off incident or an ongoing occurrence, is sexual harassment.

“These behaviours may seem easy to dismiss, ‘it was just a joke, it was meant as a compliment, what’s a hug between colleagues’ – but consider how it feels to be treated that way, day in, day out” – this is a reality for many people in our workplaces and no industry is immune.

Complaints based mechanisms are not the panacea that many believe them to be. In fact according to Kate, complaining is seen as almost un-Australian, thoughts that have been echoed recently by high-profile media pundits and political leaders who have told female politicians highlighting bullying to ‘suck it up and get on with it’.

While workers were willing to report experiences of harassment to the survey, the vast majority did not report their experiences to managers or HR departments. Fearing repercussions, many believed complaining was a sure-fire way to be ostracised and labelled a trouble-maker. These fears were substantiated by the survey’s findings which reported that complaints often changed nothing and that allegations of harassment made by women were less likely to be acted upon than those made by men. Compounding this, bystanders who witnessed harassment also felt that reporting would achieve nothing more than negative repercussions for themselves.

The pervasive nature of sexual harassment in Australia’s workplaces carries economic implications for the country and the time of patiently waiting is clearly over. Unmitigated inappropriate behaviour has consequences for individual health and economic wellbeing while also stymieing business productivity and the benefits of capitalising on the full utilisation of women’s skill set. And as Kate reminds us, the absence of women in decision making roles across government, business and society has deleterious consequences for women in our society. Our CEO Frances Crimmins also spoke about this recently at the Local Government Professionals Australia Congress, with specific reference to older women’s housing insecurity.

The Australian Human Rights Commission is conducting a world first national and broad-ranging inquiry into sexual harassment in the workplace. The inquiry will travel the country to examine the extent of the problem and identify best practice solutions with a view to providing recommendations to government and business stakeholders. YWCA Canberra will be making a submission to the inquiry, and we will be asking members for their input around their personal experiences and recommendations for change, so watch this space.

Did you know that YWCA Canberra has a publication dedicated to our Advocacy and Campaigning work?

YAction shines a light on the advocacy of YWCA Canberra, like minded organisations and the issues that are important to our community. Advocacy is core to what YWCA Canberra does – women  must be the crucial actors in any attempt to achieve gender equality.

This publication is about bringing the voices, initiatives and efforts of activists and organisations to the fore – we hope that by doing this we will increase awareness of critical issues and present opportunities for collaboration that our members, friends and supporters can get involved in. Ultimately, we hope to strengthen a movement that works together to achieve gender equality in the ACT, as we believe that this will take a community wide effort.

Never miss an issue by subscribing to YAction here.