The uncomfortable truth about sexual harassment in Australian workplaces

In Australia, sexual harassment is widespread and pervasive. It is estimated that 85 per cent of women aged over 15 years have been sexually harassed at some point in their lives, carrying detrimental impacts on an individual’s physical, emotional, and psychological well being as well as their professional careers.

According to the Sex Discrimination Act (Cth) 1984, sexual harassment is “an unwelcome sexual advance, request for sexual favours or conduct of a sexual nature (…) in circumstances in which a reasonable person would have anticipated that the person would be offended, humiliated or intimidated”. 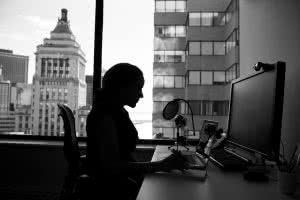 The workplace remains one of the most common places for sexual harassment with almost 40 per cent of women experiencing sexual harassment in their workplace over the last five years. Workplace sexual harassment, by its very nature, exists in structures of hierarchy. Perpetrators may sometimes take advantage of peer and power-based relationships, knowing that consequences are limited and that others are reluctant to come forward.

Workers aged 18-29 were most targeted by perpetrators with 45 per cent of this age group experiencing sexual harassment in their place of work. The Human Rights Commission also found that rates of sexual harassment were higher in people of Indigenous and Torres Strait Islander background, gender and sexually diverse people and those with a disability.

But while it may be natural to assume that workplace sexual harassment is appropriately dealt with by workplaces or through the legislative framework the reality could not be further from the truth.

Underreporting of workplace sexual harassment is significant and only 17 per cent of people making a formal report or complaint. Of those who do go on to report, almost one in five people claim they were labelled as a troublemaker (19 per cent), were ostracised, victimised or ignored by colleagues, (18 per cent) or quit their job (17 per cent). To avoid these types of reactions, victims have often resorted to suppressing their complaints and downplaying them as an overreaction (49 per cent). In instances where cases were escalated, one in five reports brought no consequences to the harasser, with the most common outcome of complaints resulting in a formal warning to the perpetrator (30 per cent).

Our own survey, the 2019 Our Lives: Women in the ACT survey, revealed that over 50 per cent of respondents had experienced instances of sexism in the last 12 months. Of this sample, 41 per cent said it occurred in their workplace. When asked whether the incident impacted their lives, nearly 50 per cent said it carried consequences for their mental health.

YWCA Canberra has a zero-tolerance policy towards any form of harassment or workplace bullying. All workers have a right to be free of harassment and discrimination and in their final report to the Australian Government, the Human Rights Commission recommended that educational resources on workplace rights and entitlements be provided through schools, universities and technical colleges to young people on the cusp of entering the workplace.in their workplaces.

Here are some ways to stay informed on the issue.

If you suspect you are being subjected to sexual harassment, you should familiarise yourself with your workplace’s enterprise agreement and read the advice of the Fair Work Ombudsman. If you are employed in the ACT, you can call Worksafe ACT.  If you are a member of a workplace union, you should also seek their advice.

Documenting your experiences including the dates, times and locations of incidents can help if you choose to seek legal advice or formalise a complaint.

Be vocal and stand for change

Ultimately, one of the most effective ways to eliminate sexual harassment in our community is through systematic change and policy reform. One way YWCA Canberra encourages reform is through our advocacy work supporting the implementation of Respectful Relationships Education (RRE). Implementing school-based Respectful Relationships Education was also a recommendation of the Human Rights Commission report.

Along with our support for RRE, we also run several proactive workshops such as the Active bystander workshop to help small business owners work towards being more active, and vocal about matters surrounding sexual harassment and violence in the workplace. These workshops provide participants with an understanding about when and how to intervene  in public harassment or abuse when considered safe to do so.