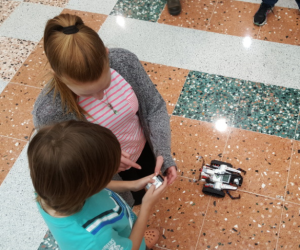 This term, the Tech Time Workshops have provided a great opportunity for eight young women to participate in an introductory course in robotics, using Lego Mindstorms EV3. The Workshops were made possible through an ACT National Science Week Seed Grant.

Over six sessions, participants were split into two teams, and designed, built and programmed their own robots, culminating in a final showcase comprising a series of challenges against the other team at the Tuggeranong Hyperdome on Sunday, August 7.

We were fortunate enough to have three fantastic volunteers from ANU Robogals join us for the final workshop, as well as the showcase. Robogals is a global initiative whose mission is to inspire, engage and empower young women into engineering and other related fields; the perfect group to be involved with the Tech Time Workshops. They helped the participants optimise their robots and strategise the best way to use the tools on their robots to complete the assigned tasks.

Team one named themselves “Team Savage Cuttlefish”, and built the R3PTAR; a snake inspired robot that slithers along and can sense objects and pounce on them with its fangs. Because of its infrared sensing eyes, they named their robot ‘Wall-T the Tankclaw’, a portmanteau of popular sci-fi characters Wall-E and ET. Team Savage Cuttlefish managed to program their R3PTAR to slither along the ground, hiss and strike out with its fangs at anything close enough to its infrared-sensing eyes. 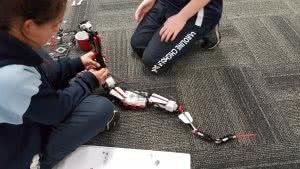 (who didn’t assign themselves a name) opted to build the SPIK3R design, a scorpion inspired build that features nippers on the front and a tail, which was named ‘Turbo’. This team programmed their robot to shoot plastic marbles from its tail. The mechanism for shooting the marbles can be seen in this short, slow-motion video.

The robots were finished ahead of schedule and ready to go in time for the showcase at the Tuggeranong Hyperdome. Participants arrived at midday to commence final preparations with their robots, which included putting batteries in, checking the remotes and making sure all functions were operational.

The four challenges of the showcase were:

I’d like to extend a massive congratulations to all the young women who participated in the program; your initiative, willingness to learn, team spirit, and most importantly support for each other no matter which team you were on was truly amazing. Seeing you cheering on the opposition at the final showcase was one of the biggest highlights for me and I wish you all the best in whatever you go on to do, whether it is in a STEAM field or not. You have proven that you have the skills to design, build and program amazing and unique robots. I hope that you have learnt as much and had as much fun as I had throughout the program.

Lastly, and certainly not least, I’d like to thank everyone who has made this program possible. Thank you to the ACT National Science Week Coordinating Committee for the grant that made it possible to run these workshops, to the staff at Caroline Chisholm for your eagerness to participate and your ongoing support throughout the sessions, to the Tuggeranong Hyperdome for their kind donations of a space to hold the showcase, as well as some amazing prizes for the participants, to the volunteers from Robogals, to the staff at the YWCA Canberra Mura Lanyon Youth and Community Centre who helped out with bus transport as well as the final session, and to the young women who participated in the program. None of it would have been possible without all of your support.

We definitely want to run these workshops again, so keep your eye out for more in the future!