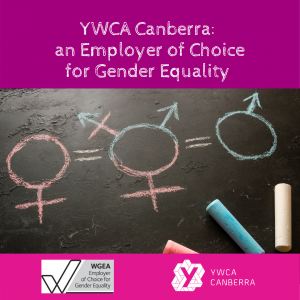 YWCA Canberra is proud to have once again been recognised as an Employer of Choice for Gender Equality (EOCGE) by the Workplace Gender Equality Agency (WGEA). We have held this citation consistently since 2014 and, for the second year in a row, are the only ACT-based organisation to receive it. A total of 136 organisations are on the citation list for 2021.

According to WGEA Director Libby Lyons, “the WGEA Employer of Choice for Gender Equality (EOCGE) citation is recognised as a rigorous and sophisticated guide for employers to implement leading-practice initiatives designed to achieve gender equality in their workplaces.”

At YWCA Canberra, we strongly believe that gender equality is a fundamental human right.

“Gender equality is at the heart of what we do and have done at YWCA Canberra for 90 years,” YWCA Canberra CEO Frances Crimmins said.

“We support WGEA’s aims to increase workplace rights for all genders, reduce the gender pay gap, and work towards an Australia where people are able to access and enjoy the same rewards, resources and opportunities regardless of gender.”

Research has shown time and again that diversity and inclusion are good for us at the individual and organisational level. “Our diverse and inclusive workforce improves our efficiency, productivity, innovation, creativity and employee engagement,” Ms Crimmins said.

Why, then, are more workplaces not seeking and achieving this citation?

With so many organisations publicly claiming they are implementing initiatives designed to achieve gender equality, why are only 136 organisations across the nation receiving this citation in 2021? (Though maybe we should be thankful that increased from only 119 last year.)

The EOCGE program is voluntary, so other organisations would likely meet the standards but have chosen not to apply. But demonstrating this in a public forum and committing to achieving gender equality in Australian workplaces should be an important precedent for all employers.

And even more important is the commitment to continue this essential work: all too often, we see gender equality policies developed and backs patted, but no real, long-term change in culture, and continued disparity in pay, conditions and access to promotion.

As demonstrated all too clearly in the last few weeks in Parliament House, one of the most prestigious workplaces in Australia, a culture of gender inequality can lead to the most heinous of circumstances, where women are not only assaulted but fear standing up will cost their careers.

Every employer should be actively working towards demonstrable improvements in gender equality.

If YWCA Canberra, a local not-for-profit and employer of around 300 people, can achieve this standard and continuously prove that for seven years, what is holding back other workplaces?