What’s been happening in advocacy! 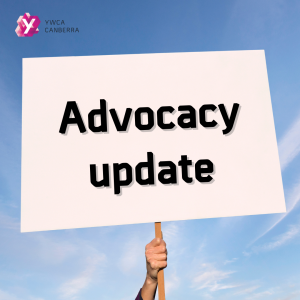 Canberra currently in lock-down we wanted to take a minute to update you on some of the key issues we have been engaging with recently.

In light of #March4Justice and a drop in sexual assault convictions despite an increase in reports, the ACT Minister for Prevention of Violence against Women, Yvette Berry established a Sexual Assault Prevention and Response Steering Committee comprised of members of the community sector, the legal community, academia, businesses and unions as well as representatives from the ACT Government.  At the time of establishing the Working Group, the Minister noted that it was “time to put survivors at the centre of how we respond to sexual assault and violence”.

Three separate working groups have been established to advise the Steering Committee on elements of reform including prevention, response, and law reform. Separately, a workplace reference group has also been established to provide insight into the experiences of sexual harassment and assault in workplaces. As long-standing advocates for policy reforms that will create the cultural change needed to eliminate violence against women, YWCA Canberra were invited to be a member of the prevention working group. This group has met consistently since the end of June to explore ways that the ACT can prevent sexual violence in our community. Our representations have advocated for comprehensive relationships and sexuality education as well as system wide reforms to existing protective mechanisms such as Working with Vulnerable People Checks, Reportable Conduct and government commissioning.

Sexual violence is not a foregone conclusion in the lives of Canberrans and cultural change towards the elimination of violence against women is possible and must be pursued. The group believes that with the right ambition and vision as well as improvements to existing frameworks and levers available to government that we can get to a point where the rates of sexual violence are reduced and the response from all parts of the community is informed, compassionate and lead by research and evaluation.

Similarly, we also worked with the Global Institute for Women’s Leadership (GIWL) to contribute to their submission to the ongoing Australian Human Rights Commission inquiry into the culture of parliamentary workplaces. As a member of the drafting committee set up by the GIWL, we worked alongside academics, retired and current members of Australian parliaments and stakeholders in women’s leadership to draft the submission.  The submission drew attention to Parliament’s place as a model workplace as well as the paradox that while Australia was one of the first countries to begin the progressive enfranchisement of women, culturally it has excluded them from positions of advice, influence and power. The GIWL submission called for mandatory and evidence-based training, a legislated and enforceable code of conduct for all persons at parliament regardless of office of employment, or status as a volunteer or visitor, and transparency of reporting processes. The submission also calls for an independent authority to oversee the code of conduct, build a culture of harassment prevention, proper management of complaints as well as tangible and proportionate consequences for those who do not uphold the code.

YWCA Canberra has also been invited to participate in the National Women’s Safety Summit on the 6th and 7th of September. The summit was established by the Australian Government Minister for Women, Senator the Hon. Marise Payne and Minister for Families and Social Services Senator the Hon. Anne Ruston and will feature keynote addresses, panel discussions and presentations as well as a series of roundtables that will form part of the consultation for the next National Plan to end violence against women and their children. We know that violence against women is dynamic, evolving and that some groups of women are particularly targeted by unique forms of violence. Furthermore, responses to violence can mean contact at many service points including housing and community services, police, justice and government. We look forward to bringing updates to our members and community in the period following this important forum.