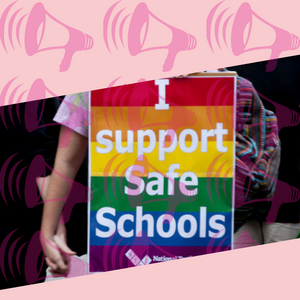 In 2010, the Victorian Government established the Safe Schools anti-bullying scheme, which grew into an $8m four-year federally funded national program in 2013. Their mission was simple: to ensure schools are safe places free of discrimination for all students, including lesbian, gay, bisexual, transgender, gender diverse, intersex, queer, asexual and questioning (LGBTIQA+) students. This was born out of a need identified by communities, parents, and educators for support for LGBTIQA+ students, who face higher risks of bullying and suicide due to experiences of homophobia, transphobia, and discrimination.

The program allowed schools to voluntarily join the Safe Schools Coalition in their state, which primarily provided training for educators and staff. An integral part of the program was to provide professional development and training for teachers to give them the resources and knowledge to support their LGBTIQA+ students.  However, the scheme soon became heavily contested in the political and public sphere.

The political controversy surrounding the program

In 2016, the federal government at the time commissioned the Louden review, which supported Safe Schools and recommended only minor changes. However, once handed over to the subsequent government, further changes were actioned, including restricting the program to secondary schools, requiring parental consent for participation, and needing parental bodies to allow schools to engage.

Meanwhile, the media backdrop to this included highly public condemnation from the Coalition, who criticised the program stating it would “impose a politically correct gender and sexuality agenda on schools“. Instead, they proposed to replace Safe Schools with a broader anti-bullying program that was not specific to the LGBTIQA+ community and focused on cyberbullying instead. In 2016 Safe Schools was defunded by the Coalition.

The need for an intersectional feminist lens on programs and policies

The obtuse suggestion to replace Safe Schools with a broader anti-bullying strategy highlights the need to apply an intersectional feminist lens to issues such as bullying, which often stems from greater social inequalities associated with young people from marginalised backgrounds. Gender identity, sexual orientation, race, religion, disability, and socioeconomic status are substantially linked with young people’s experiences of bullying.

Kimberlé Crenshaw, an American lawyer, civil rights advocate, philosopher, and scholar who coined the term ‘intersectional feminism’, explains the term as “a prism for seeing the way in which various forms of inequality often operate together and exacerbate each other”. As stated by Crenshaw, “all inequality is not created equal”; therefore, it is imperative to apply an intersectional lens to acknowledge how young people’s identities can overlap and compound experiences of discrimination, oppression, and trauma.

Research has found that inclusion or anti-bullying policies for LGBTIQA+ students can have a direct, positive impact on student’s health and well-being. An intersectional lens allows educators, teachers, students, and school communities to better navigate LGBTIQA+ related bullying and implement more effective policies, ultimately creating a safe space for LGBTIQA+ students to feel seen and heard. Without applying an intersectional lens to policies and programs, we have little hope of ever tackling bullying and other systemic issues entrenched in inequality.

Find out more about Safe Schools.