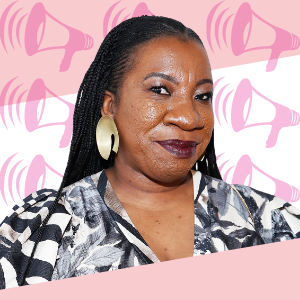 Tarana Burke is an activist, community organiser, executive, and most notably the founder and architect of the global #MeToo movement. Born and raised in the Bronx, New York, Tarana has a long-standing history of advocating for women’s rights, specifically women of colour and survivors of sexual violence.

As a survivor herself, Tarana spent much of her youth advocating for initiatives that focused on housing inequality, racial discrimination, youth development, and economic justice.

Her passion for advocacy eventually led her to move down south to attend Alabama State University (a historically black university) where she went on to develop her skills in activism and organisation.

Upon graduating, Tarana settled in Selma Alabama, where she eventually founded the youth activist group, ‘The Me Too Movement’. The group was established to provide young black and brown women with resources, support, and a space to safely share their stories and connect with other young women.

It was through conducting one of her workshops, that Tarana recalls one of her earliest recollections of ‘Me Too’.

“In 2006, we had done a workshop where we gave each of the girls in the classroom – about 60 girls – a piece of sticky note and said, ‘Tell us three things we learned in the class. And if you have survived sexual violence, write ‘Me Too’ if you want to, if you feel compelled to.’

“When we went back to our hotel room and went through the notes, more than half of them said ‘Me Too’, Tarana shared in an interview with the ABC.

It was during this moment, Tarana realised that experiences of sexual violence were rife among young women and that it needed to change.

Despite starting out as a grassroots movement, it would not be until several years later, that #MeToo would become a global phenomenon.

On October 16, 2017, Hollywood Actress, Alyssa Milano took to Twitter to write, “If you’ve ever been sexually harassed or assaulted write ‘me too’ as a reply to this tweet”.

Within 24 hours, Milano generated more than 12 million shares across the platform using the hashtag #MeToo. Survivors from around the world used the hashtag as a channel to share their own experiences of sexual abuse and to help raise awareness towards sexual violence.

As momentum continued to build behind the movement, it influenced a swell of support for survivors to share their stories while holding perpetrators and institutions to account.

Perhaps one of the most defining moments of the #MeToo movement emerged during the investigation of Hollywood movie director and sexual predator Harvey Weinstein. During the peak of the movement, several women came forward with sexual assault allegations against Weinstein, prompting an investigation into the assaults and later his conviction.

While this just one of the many outcomes that have emerged from the movement, it serves as a clear reminder of the power individuals hold when they galvanise together.

“There is inherent strength in agency. And #MeToo, in a lot of ways, is about agency. It’s not about giving up your agency, it’s about claiming it.” – Tarana Burke

Five years on, the Me Too movement is still going strong, with Tarana continuing to work alongside a growing spectrum of victim survivors all around America. While the Twitter storm has seemingly settled, there’s no denying the impact Me Too has had around the world, influencing cultural and institutional change.

In celebration of her unwavering commitment to stopping sexual violence, Tarana has been awarded countless honors and accolades including the 2017 TIME Person of the Year, and the 2019 Sydney Peace Prize.

If you would like to find out more about Tarana and the Me Too movement, check out her website.