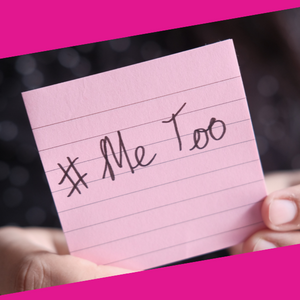 In 2017 the #MeToo movement, founded by American activist Tarana Burke, echoed around the world, creating solidarity amongst thousands of women and gender diverse people. Over the following months, as it began to gain momentum in Australia, journalist Tracey Spicer launched an organisation in line with the movement called NOW Australia.

NOW Australia quickly gained widespread attention from the media and the public as it promised a “one-stop shop” for victim-survivors of sexual harassment and sexual assault. Spicer made the well-timed announcement at an International Women’s Day event in 2018, stating that she was going to launch Australia’s equivalent to Time’s Up. Promising victim-survivors a service that would direct them to legal support, counselling and journalists, NOW launched with an entourage of Instagram influencers, merch, social media tiles, and a feature in the June 2018 edition of Business Chick’s glossy Latte Magazine. The magazine cover pictured seven women in power suits and heels with the words “This ends now – Tracey Spicer and the women dismantling discrimination” plastered across it. There was one glaring issue that Spicer and the team did not pick up. The women on the cover appeared to be middle-class, cisgender and overwhelmingly white.

With a relatively diverse board, it was puzzling how the faces selected to publicly represent the movement didn’t actually reflect the diversity of victim-survivors in Australia. An issue all too familiar to marginalised people, the final call on the models seemed riddled with unconscious bias. Further, it may have added to setting a precedent for who the mainstream media and thus the public, would go on to consider a victim-survivor worthy of a platform.

Despite attempts to keep the organisation going, NOW Australia eventually ceased operations. Many articles following the closure of NOW Australia outlined some of the reasons why it may have failed, stating reasons such as a lack of thorough community consultation, not working from a trauma-informed framework, not being qualified legally or in counselling, and overall, not consisting of experts in the field. However, what does not appear to have been mentioned is how the unconscious bias of NOW Australia has only added to the hurdles faced by diverse victim-survivors who seek to have their stories heard publicly.

Unconscious bias is widespread within white feminism, a form of feminism that exists to promote the well-being and safety of middle-class white women. On a surface level, white feminism claims to speak for all women. In reality, it is a racist ideology that disregards the needs and voices of First Nations women, black women and women of colour. As a result, it does not adequately address racial intersectionality in experiences of sexism, nor does it acknowledge that women have the ability to oppress other more marginalised women.

In 2022, Brittany Higgins became a household name as a prominent victim-survivor fighting for justice against workplace sexual violence, particularly in Australian politics. She has been a trailblazer for change, bravely sharing her story to assist in shifting the narrative and holding perpetrators accountable. Yet, before Higgins, two other women in the same industry told their stories. For a long time, these stories went unheard in the mainstream media and gained little traction on social media. Woman of colour, Tessa Sullivan, was one of the first to publicly come forward in 2018 when she told her story of sexual violence in politics. This later inspired fellow woman of colour, Dhanya Mani, to come forward in 2019 about her experience of abusive conduct by a senior staffer in NSW Parliament. In 2021, mainstream media finally provided coverage of Mani and Sullivan’s stories. However, they still did not receive anywhere near the same coverage as Higgins.

Why didn’t Mani and Sullivan receive the same public outcry and support? This could be attributed to Neil Christie’s concept of the ‘ideal victim’, which describes a particular person or a group of individuals who, when experiencing crime, are provided with the legitimate status of being a ‘victim’. We cannot separate the concept of the ideal victim from the concept of unconscious bias as both impact one another. In Australia, we frequently see the ideal victims portrayed in the media as white, cisgender, able-bodied, middle-class women directly resulting from negative stereotypes that portray any woman who does not fall into this category as less worthy. Spicer’s campaign and movement did nothing to disrupt this deeply ingrained belief system.

The story of NOW Australia is a glaring reminder to all feminists with privilege that it is vital to question and unlearn our own unconscious bias. In doing so, we must also remember to centre diverse voices in order to disrupt and dismantle the structural inequalities that dictate whose safety is prioritised in our society. We owe that to all victim-survivors.