Our Computer Clubhouse Coordinator Lach talks about an exciting excursion during the past school holidays to the Canberra Deep Space Communications Complex, part of NASA’s Deep Space Network.

Computer Clubhouse members had a fantastic tour of the facilities, starting with a guided look at the 70m telescope, the largest in the Southern Hemisphere as well as the radio telescope that received the video footage from the 1969 moon landing. 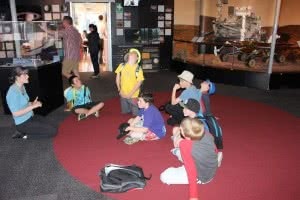 We then learnt a bit about our solar system, including cool facts about the Mars rovers, water on Mars, the probes exploring our solar system, the history of moon landings and more! Following some questions and answers from our members, we had some time to explore around the complex.

We had a look at lots of different things including space suits, models of the Mars rover and a model of the Apollo 11 command module.

The Stellarium really caught our members’ attention – a computer program that shows you what you can view astronomically from any part of the world at any time and date. We then went in to the cinema area where we watched a video on our solar system and the scale of objects and spaces in it.

We were introduced to a fantastic website called The Scale of the Universe designed by a 14 year old that shows the size of objects in the universe ranging from the length of a plank to the size of the observable universe.

We also learnt how to identify galaxies, what happens when galaxies merge and how different telescopes can use different bandwidths to gather information.

Everyone had a fantastic time and wished that we’d had more time to spend out there. One member, Angus (12), said that it was “informative and amazing”. Another member, Tom (10), said “my favourite part was watching the two galaxies merge”.

We’d love to extend a massive thank you to Korinne, our guide for the day, and the Canberra Deep Space Communications Complex for showing us around.