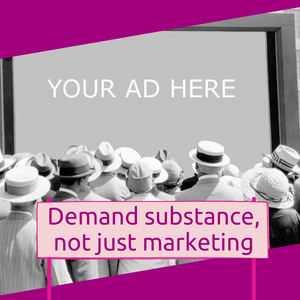 Campaigning, advocacy, and philanthropy, by their very nature, demand a certain degree of innovation. If we want our cause to have reach and attract attention, creativity and a level of marketing are fundamental. Politically speaking, while short messaging devoid of nuance or policy detail tends to be met with derision by the Insiders crowd, there’s no debating that they cut through when an election is in the air, a time where apathy can be high and time in short supply. We’ve all become familiar with the three-word political slogan, right?

But what does it mean when creativity and slick marketing for a given campaign hide intrinsic flaws that fail to address the long-standing social problems that may underlie the issue at hand? At what point does ‘creativity’ become little more than a useless and, often, expensive gimmick? In this article, we unpick some gimmick campaigns and what they mean for genuine endeavours.

In 2019, we saw the emergence of the SleepBus, created by an entrepreneur with the well-intentioned objective of providing shelter for women who were homeless or rough sleeping.

SleepBus’s social media savvy meant you could see the buses be fitted out and ready to launch, make donations or offer to volunteer at every stage. Donations flooded in, comments on their posts were nearly all either cheering the project on, offering donations or volunteer interest. As interest peaked, donations to long-standing women’s shelters and support providers were diverted to the SleepBus, which effectively came to be held as doing more to end homelessness than those specialist services ever had.

When the bus was launched to great media fanfare, the organisers hosted an open day, where non-homeless people could get a firsthand look at the small sleeping pods that homeless women and children could access.

“The pink sleep bus will be the first of its kind – offering safe sleeping for women and children” offered the Founder of Sleepbus, Simon Rowe.

After more than six months of operation and hundreds of thousands of dollars in donations later, just nine women have used the SleepBus. For reference, there are around 1200 women in Canberra who are either homeless or on the brink of homelessness. The latest social media update from Sleepbus indicates that the service has been temporarily suspended due to COVID-19.

None of this came as a surprise to specialist women’s homelessness service providers who have long cautioned against the prospect of a vibrant pink bus in response to the often-traumatic ways that women become homeless. We consistently called out obvious safety flaws and the fact that women who were homeless would simply prefer to sleep in their car (if they have one). Looking at the six-monthly data, it would appear our hesitations were well-founded.

Further from home, we can find equally well-intentioned campaigns that wind up as gimmicks that are big on marketing and excitement but ultimately fail to deliver. PlayPumps was a project to provide water pumps to African villages. Even though conventional pumps were cheaper and what communities wanted, PlayPumps stepped it up, providing a water pump and a toy for children at the same time. A marketer’s dream: Children playing on a merry-go-round create the momentum to pump water for storage. It raised millions in global donations and funding from celebrities and the US Government.

The only thing was that, to generate enough water to fill the tank, children had to play on the pumps for an impossible 27 hours. The pumps were also too complex for local maintenance crews to fix so break downs went unrepaired. Suddenly play-time looked like child labour and a simple breakdown meant a long walk to another pump, often undertaken by women, issues that were raised by long-standing safe water advocacy groups when PlayPumps started gaining momentum.

Ultimately, PlayPumps became unfashionable and leading philanthropist support pulled out, realising the on-the-ground delivery was overly complicated and ineffective while also throwing the bigger question of “what does this mistake mean for philanthropy” into the mix.

Why should we be smart to gimmick campaigns?

There is much to lament about gimmick campaigning. Grounded on good intentions and positive marketing but without accompanying expertise or research, they inevitably fail. The euphoric initial interest from the volunteer base might eventually wane leading to questions about the effectiveness and contribution of one’s time commitment.  And the consequences can be widespread: users of the gimmick service are affected, as are the volunteer and donor base who are left feeling burnt-out and potentially sceptical of future involvement in philanthropy and social causes.

Of course, it isn’t just small start-ups and social enterprises whose marketing effectiveness can often fail to match the desired outcome. Many national and global corporations have become savvy in advancing important social causes. For many national corporations, a socially conscious public image is an immensely quantifiable commodity, but one that when not reflected in business operations can be exposed for tokenism.

Take for example Reconciliation Australia’s now former Elevate Partners, Rio Tinto and Telstra. Glossy brochures, a national leader in reconciliation, smart advertising and lobbying about how they work with Aboriginal clients, staff, communities and Native Title owners came undone when Rio Tinto blasted the 45,000-year-old Juukun Gorge despite repeated warnings from Traditional Owners. Rio Tinto later conducted a board-led inquiry into the blast, a move that was widely admonished. And then take Telstra, which was found by the ACCC to have engaged in ‘unconscionable business practices’ that exploited cultural vulnerabilities in Aboriginal clients when they were signed up to phone contracts many could neither understand nor afford.

These divergent examples of gimmick campaigns and token gestures add to this edition of Action Matters by laying the foundations for how developing genuine values-based narratives can meaningfully inform a campaign and how small campaigns can bring about tangible change to the community without costly and slick marketing when it is reinforced by sincerity and experience.