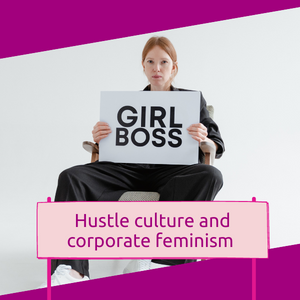 The motivation to develop a personal brand in a time of the influencer is a powerful force and can often accompany feminist-inspired social change. But can this change be considered authentic? And should it attract widespread support if its foundations are anti-feminist or laden with a tangible sense of white saviour complex?

In this edition of Action MATTERS we look at how corporate feminism has gained traction through a media savvy cohort of influencers, and emerged as a platform quick to offer resolutions to long standing social problems while purging the historic messages of collective justice and structural reform.

Trying to hone a successful niche in the new online hustle for followers and reach can be a long slog if you don’t have an immediate skill to back it up with. Enter the opportunities of corporate feminism, where ‘feminism’ is the label to peddle any number of saliently anti-feminist products or opinions and leapfrog the longstanding work of others in the pursuit of personal advancement.

Conveniently, corporatised feminism offers this transformation without having to deal with pesky concepts such as class politics, social injustice, or any reflection on the collective struggle of women through history.

The parallels between the new age hustle and Sheryl Sandberg’s Lean in mantra are abundant. Through Lean in, empowerment was achieved by working harder, being ruthlessly self-promoting, wrestling a seat at the table and burying ‘deficits’ like empathy or even healthy levels of doubt. Leaning in was also sold as altruistic because its trickle-down method allowed the #girlboss to feel she was advocating for other women as she made her way to the corporate suite. It didn’t matter of course that the race, class, or identity of other women likely narrowed their chances of getting to the suite, because the philosophy of the corporate Godzilla didn’t bother with structural change.

Lean in’s influence has waned, though it continues to colour how well connected, savvy and typically white feminists approach an unmissable social trend; a moment to be marketed and a problem they alone can solve.  We can see this in the haste with which the corporate feminist goes about hijacking a cause, by usurping those who have quietly and determinedly fought the same problem without the equivalent resourcing, recognition, or clout.

The arrival of Australia’s #MeToo moment and the meteoric rise and crash of  NOW Australia, which happened in its wake, presents a case study in the above. At its launch celebrities and entertainers were galvanised by revelations of sexual harassment in Australia’s media industry. A leadership group of almost entirely white middle class women promised an end to sexual harassment in Australian workplaces, legal support and counselling as well as sympathetic media. 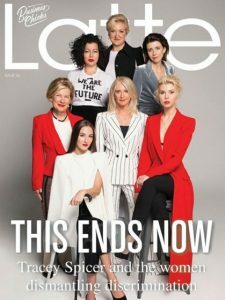 That women had collectivised their power to progressively dismantle structural barriers to workplace equality and that advocacy groups had spent decades responding to claims and campaigning for recognition, didn’t seem important and neither trade unions or frontline services were part of NOW Australia’s consultation or leadership. And, neither did it matter that the #MeToo force behind NOW Australia was initiated by African American women and that women of colour were abundantly underrepresented by NOW Australia’s leadership.

More prominently, with International Women’s Day we can see how feminist platforms have been sanitised for mass consumption. Every year, companies, individuals, and politicians looking for an easy IWD message stumble across the heavily advertised site www.internationalwomensday.com for inspiration. Seemingly unaligned with the official UN day of action, the website offers catchy and alliterative slogans such as #BreaktheBias or #EachforEqual, (as alternatives to the UN official theme for IWD), which help with mass, unquestioning take up*. The website itself is devoid of overtly feminist messages, rather the emphasis is on the achievements of corporate women, events, business support and employer initiatives.

With the inoffensive office IWD morning-tea clearly at the front of mind, corporate IWD provides pre-designed placards and selfie poses as part of the marketing campaign. And when the cupcakes are all gone, everyone can return to the workplace and put awkward conversations about management level gender ratios, carers leave or equal parenting on the backburner for another year. Almost to counter expected criticism corporate IWD has the following message on its website: No one government, NGO, charity, corporation, academic institution, women’s network, or media hub is solely responsible for IWD. The day belongs to all groups collectively everywhere.

This is of course true, and it is why we use this edition of Action Matters (and every edition) to critique and showcase the diversity of voices and collective struggles of women who proudly label themselves feminist and who work with quiet, and typically under resourced determination to create change and advocate for collective empowerment and structural

*It would be remiss and unfair to ignore the fact that YWCA Canberra used the corporate slogan #BalanceforBetter in 2019. We learnt from this oversight and have since only messaged using the UN Women theme.