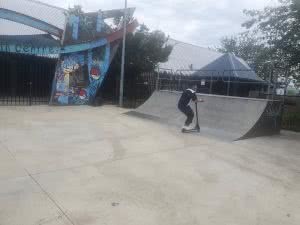 On Tuesday 7 January, members of the Mura Lanyon Youth and Community Centre (MLYCC) teamed up with a group of eight Lanyon youths to facilitate a scooter competition at the Lanyon Skate Park. Following a request to run the competition, MLYCC youth worker, Tim, worked closely with the group of young skaters to establish an event plan, a scoring criterion and a judging panel for the competition ahead.

Once the event was ready to begin, each of the eight young competitors took to the pipes to show off their tricks and skills in a bid to win over the judges. Once the competition was over, the scores were calculated, and it was time to name the winners. While the placed winners won prizes in the form of bike grips and stickers, remaining competitors were also awarded stickers, lollies, and icy poles for their participation and efforts. The event was a huge success and taught many of the youths the importance of communication, problem-solving and team building.

Since running the competition last month, other events have since taken place at the skate park with many more planned for the future. To further show his support, Tim has also been working closely with Straight Line Sports business owner, Andy, to help create a basic sponsorship to use for future youth program events and activities.