During the July school holidays, the Lanyon Youth Centre again ran a free holiday program, open to anyone age 12 – 25 living in the Tuggeranong region. 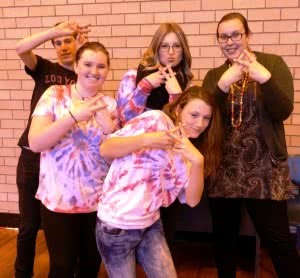 Team Hashtag at the Dodgeball Championship.

The program comprised two open drop in days at the youth centre, and three excursions to take young people out to see more of Canberra.

In the first week of the holidays, young people were invited to tie-dye T-shirts at the youth centre. The result was fabulous, with fantastic designs and beautiful colours.

Young people from the centre also attended a NAIDOC Week celebration held at The Smith Family in Woden, which was co-hosted by YWCA Canberra. They had the opportunity to try some Indigenous art, some bush tucker (watching out for the spicy pepper leaves!), and to cook their own damper.

In the second week of the holidays, Lanyon Youth Centre and Woden Youth Centre sent a joint team to an inter-agency Dodgeball Championship held at The Corner in Belconnen. Several young people wore the T-shirts they had created in the first week as a team uniform, and Lanyon’s ‘Team Hashtag’ gained a respectable second place, only losing out to the team from Queanbeyan.

Also in the second week, young people went on an excursion to the Limelight Cinema to see Minions, and a Harry Potter-themed open drop in day was held at the Centre, with a Harry Potter movie marathon and themed activities.