What the suffrage movement can teach us about intersectionality today 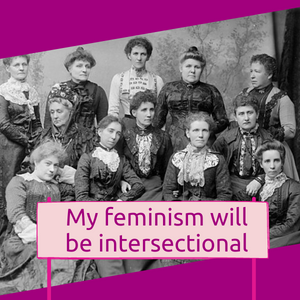 Recent years have seen some popular reflections on the path to women’s enfranchisement. The centenary of women winning the right to vote in America (1920) and Britain (1928) were celebrated. Films like Suffragette allowed us to appreciate the movement’s composition and, in doing so, forced us to acknowledge its shortfalls and be mindful of them in contemporary approaches to feminism. We also had to acknowledge that, while the legislative steps towards enfranchisement for women in America and Britain both commenced in the early 20th century, progress for some did not deliver progress for all.

In America, the passage of the 19th Amendment may have prohibited the United States Government and State governments from denying the right to vote on the basis of sex, but it did not materialise in the practice of universal voting for all women. A similar quandary also evolved in Britain, where enfranchisement was initially only granted to those women over the age of 30 who met property-based requirements. And while a simple contemporary explanation for these restrictions on suffrage may be to cast blame on the white, educated and wealthy male legislators of the time, doing so absolves the many women of those movements who were not only ignorant of including women who didn’t look like them in the cause, but in some cases were actively racist in their lobbying efforts to exclude them.

Through reflecting on the dynamics of women’s suffrage, we can see the early signs of exclusionary forms of feminism. In particular, how the white women of the American suffragette movement engaged in careful manoeuvring with Congress to nullify the amendment’s scope. American suffragettes bargained with Congress legislators on how to progress women’s suffrage within the Constitution while simultaneously supporting the rights of individual states to apply literacy tests or poll taxes to restrict voting eligibility. These strategies overwhelmingly disenfranchised black men whose voting rights had been recognised, at least in theory, decades earlier following the end of the Civil War. It eventually took decades of activism in the face of racial violence and systemic injustice for such suppression tactics to be prohibited through landmark civil rights legislation.

The betrayal of women of colour by the overwhelmingly white and educated suffragette movement provides the opportunity to consider contemporary forms of exclusionary feminism. In particular, trans-exclusionary radical feminism (or TERFism) applies an exclusive definition of feminism that is targeted to alienating trans women from the collective movement. Underpinned by their central argument that trans women are not women and that including them is a tactic to silence the voices of cis-gendered women and girls, TERFs leave countless trans women and their allies fighting a centuries-old argument about who is entitled to join the feminist collective.

While TERF activists operate in overt ways to exclude trans women from the conversation, exclusionary practices also operate in subtle but no less significant ways. Trans women who experience domestic, family or interpersonal violence continue to be denied access to important social services such as crisis shelters and housing because access can be at the discretion of the service provider. Likewise, the management of the McIver’s Ladies Baths in Sydney recently made a public directive banning some trans women from accessing the baths, which resulted in an online stoush that pitted the TERFs against the rest of the collective.

Exclusion as a recurring feature in feminist history is given contemporary oxygen through contemporary policies and service designs, but also through more popular ‘lean-in’ feminist approaches that speak to the corporately inclined while abandoning the working women who are in cycles of bills, parenting and commuting. But the good news is that, through honest reflection on the motives and shortcomings of feminist history, we can both celebrate progress while exploring and recognising unique and contemporary forms of exclusion.

For those readers who are establishing a campaign or advocacy network, the first step should be to honestly assess if you are making space in your campaign for intersectional voices that cut across gender, age, sexuality, disability, class, language, race and socioeconomic status. Ask yourself not only if these voices are present in your planning but if their circumstances are accounted for in your desired outcome.

The corporatisation of feminism and emphasis on diarising your every feminist lesson about smashing glass ceilings on social media has meant that in practical terms, the women without the resources, education or even inclination to become their own corporate Godzillas are excluded. In this vein, consider if your approach to feminist advocacy will benefit only those who perhaps most reflect your approach—educated, media-savvy and middle class—at the expense of the millions of women who perhaps don’t fit this profile but whose place in public policy is enormously influential and electorally significant.

Rather than betraying feminism, those women who make the choice to curtail careers to raise a family may calculate that balancing exorbitant childcare fees with the income-based subsidy entitlements simply isn’t worth it—a fundamental premise for campaigning on early learning accessibility, income equality and service affordability.

And while intersectionality may lead us to take the first step of noticing who is and is not at the table, it must also lead us to recognise how these imbalances manifest in more systemic ways, either through deliberate design or simple oversight. Doing so means we ensure that not only are all women heard but that their lives are meaningfully accounted for.