When it comes to campaigning, all publicity isn’t necessarily good publicity

All campaigns need a degree of publicity. It would be disingenuous to argue otherwise. Even your campaign to change your school’s dress code or recycling practices required you to profile 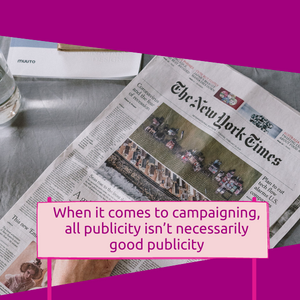 the issue, collectivise with peers, get parents or teachers on your side and essentially, spread the word. So before we drag publicity-obsessed campaigns in general, it’s worth taking a moment to reflect on how without strong public messaging and imagery, we wouldn’t have campaigns like the highly successful and visible #MarchForJustice or #WeWon’tWait campaigns. And while in the interests of spreading a message, getting strong media may be a relatively benign campaign tactic, what happens when the publicity overrides the message? Or where you achieve strong publicity before you’ve even finessed the message?

This nexus between being a “go-getter” and setting up a successful campaign may be tactically useful, but what happens when visibility becomes the core objective? In this edition of action matters, we look at some campaigns that model the maxim that all publicity is good publicity to raise funds, build a profile, or develop some slick marketing content while never questioning the significance or the damage of their impact when it’s poorly executed.

Earlier this month, we saw White Ribbon Australia go full throttle with publicity over substance when it decided to celebrate the annual White Ribbon Day fundraising campaign with a flotilla of jetskis in Sydney Harbour. And in case this wasn’t enough, the flotilla would touchingly ride the waves while forming the image of a ribbon. According to White Ribbon Australia CEO, Allan Ball, this stunt was intended as a “conversation starter” around domestic violence. After decades of discussion and progress in the space of violence against women, not to mention the national soul searching that followed the murders of Hannah Clarke and her children, Eurydice Dickson and Jill Meagher, as well as the distressing levels of femicide of Indigenous women, it’s perplexing that an organisation with a national footprint bent around men’s behavioural change, felt this campaign tactic was remotely appropriate. More so, a ‘conversation starter’ was their read of the opportunity.

If it was attention they craved, White Ribbon certainly achieved it. Social media and online opinion pieces went into a state of frenzy as the flotilla was called out for being in ‘bad taste’, ‘trivialising’ or undermining the national conversation about gender-based violence. Because the jetski display followed the launch of the new National Plan to Eliminate Violence against Women (2022-2032), it also missed a golden rule of advocacy, leveraging similar concurrent events or announcements to increase the reach of your message. Given the National Plan emphasised perpetrator behaviour as key to ending violence in a generation, White Ribbon missed both an opportunity to reinforce the message of the National Plan and their role in highlighting problematic men’s behaviour as intrinsic to understanding and ending gender-based violence.

This approach that confuses publicity with campaigning is sadly common, encompassing everything from local activist campaigns using gimmicks or disruptive tactics through to big national campaigns that rely on good branding or slick imagery to achieve cut-through. As the saying goes, ‘a rising tide lifts all ships’, and it’s possible that even when executed poorly, the resulting media attention elicits peripheral campaign benefits such as prompting discussion in offices, political debate, and homes. But is this still a sufficient outcome for nationally recognised campaigns and movements that draw immense community support and funding. It takes more than surface-level conversations, jet skis, and slick websites to prompt a broader change in behaviour like being an active bystander, donating towards a local women’s organisation or taking an active interest in what makes relationships and sexuality education comprehensive and effective.