“Women” as a public policy area, has tended to slide into discrete and recognizable piles; early learning, families, health and violence prevention for example. In this edition of Action Matters we look at how women’s policy, rather than being discreet has relevancy across a suite of significant portfolios including taxation and welfare. Often this 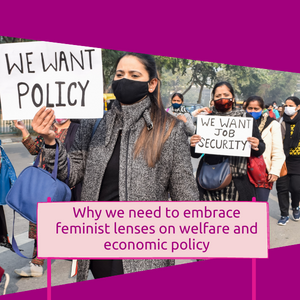 relevancy is significant, though underplayed or swamped by other ‘mainstream’ considerations. On other occasions, this relevancy should not even be worth consideration but for the murkiness of political negotiation that can trade on women’s lives. A collective awareness however of this intersection between the policy settings of mega-portfolios and women’s lives may have come much too late, and the consequences for women are deep and long-lasting.  We use edition, to look at how women have been forgotten by gender-blind policies or used as bargaining chips and how their lives have been significantly impacted by choices in policy and politics.

Responding to and eliminating violence against women, as a policy area, has gained significant traction over the last decade as governments, public debate and surveys on community attitudes indicate that much of the public no longer accept violence as an issue pertaining to the private, domestic sphere. Rather, we talk about violence against women being the responsibility of the masses and the need for a broad national approach to eliminating violence through considered and evidence driven public policy and spending. But there is a critical component to eliminating gender-based violence that is missing from the national policy debate and that is the role of peripheral economic policy and decision making that have made the life of those who have survived violence and their children, exceptionally hard.

Earlier last month, the report “The Choice: Violence or Poverty” found that nearly 60% of single parents in Australia had experienced intimate partner violence in a previous relationship that prompted them to leave the relationship. Further to this, the report highlighted how financial stress and poverty is an almost a forgone conclusion for those women who leave violence with their children and become single mothers. The report noted that around 50% of single mothers with recent histories of domestic violence were unable to raise $2000 in an emergency and nearly the same proportion were getting by on an equivalized weekly income of $460 or less.

Our own survey of 1206 Canberra women, conducted in 2021, Our Lives Women in the ACT found that 46% of single mothers surveyed had experienced domestic, family or intimate partner violence in the previous 12 months. Among this cohort nearly 30% told us they received income-support payments such as JobSeeker or Parenting Payment. And for those single mothers who had experienced violence in the preceding 12 months, 44% told us they would be unable to afford their housing tenure for one payment cycle if they were to unexpectedly lose their income.

What is clear from both these datasets is that financial crisis and poverty among single parents with recent histories of domestic or family violence is significant and despite most of these women being in some form of employment, they still rely on government payments to support themselves and their children. Why do these women, who after making the decision to leave violence – something they are sometimes either causally or forcefully told to do by the community around them – and despite being in receipt of payments designed to assist them with the cost of raising children on their own, are so many of them in dire financial circumstances?

The answer lies in how single mothers have been historically maligned as either welfare cheats or morally lax women incapable of exercising good judgement [1] and therefore theirs is a cohort easily targeted by ruthless welfare policies that cut income support and subject them to patronizing mutual obligation. The austerity of their lives and the pain of their existence do not feature as relevant.

The decision to remove single parents whose children were over 8 from the parenting payment to the meagre Newstart payment, a decision that overnight cut their payment by around $200 a fortnight while subjecting them to 30 hours of mutual obligation a fortnight from the time their child turns 6,[2] will arguably go down as one of the most deleterious policy reforms that consigned single parents and children to deprivation and housing stress. A decision, that when I reflect on it today, as someone who works across the suite of policies and services relevant to women’s lives, makes me deeply uncomfortable. I can only conceive that no Labor government would dare to introduce such a measure today when the evidence of lived experiences of violence and poverty among this cohort is so explicit.

“Government policy, through the current National Plan to Reduce Violence Against Women and their Children 2010–2022, is ostensibly to encourage and support women to leave violent relationships. But government policy, through payments policy and other welfare measures, ensures that as many as half the women who choose to leave will end up in poverty. These two arms of government policy are in direct conflict with each other when it comes to tackling domestic violence” – The Choice: violence or poverty

There is a need to discuss violence against women in those important terms of prevention and intervention, but it is abundantly clear that the role of the state and its welfare architecture needs to be reformed in a way that recognizes the connection between poverty and violence, which has been exacerbated by the state. All of this brings us to the permeable nature of policies and politics to the scope and role of gender.

The absence of a budgeting process that accounts for gender impacts and the framing of convenient political narratives and how they paint income support recipients including parents, impact on the lives of women and children across a suite of policy portfolios. Comprehensive gender budgeting would mean that changes to the parenting payment and the tampon tax would never have occurred without an analysis of the measure, individually, to ascertain whether they were likely to have a detrimental outcome based on gender. Governments and politicians can then either choose to act on or ignore such information, whichever aligns with their value set, but at least they can’t feign ignorance of the outcome.

[2] As recipients of the PPS, single mothers currently (March 2022) receive $892.20 per fortnight. When their youngest child turns 8, this payment drops to $691.00 per fortnight when they are moved onto the JobSeeker payment.  At the time of the reforms in May 2012 the maximum PPS rate was $648.50 per fortnight (pf) whereas the equivalent NSA single with dependent rate is $529.80pf