Why the face of the AIDS pandemic is now female 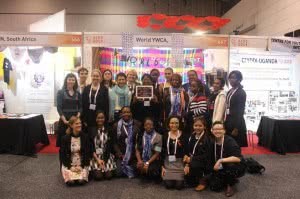 This article was first published on Women’s Agenda on July 24, 2014.

On Monday, the first official day of the International AIDS Conference (AIDS 2014) in Melbourne, Dr Lydia Mungherera from Uganda said, ‘I think the face of the pandemic is a female face.’

Increasingly, this is becoming more evident. Rates of HIV are growing steadily in young women aged 15 – 25 globally, and women account for 59% of infections in sub-Saharan Africa, the region with the highest rates of HIV in the world. (AVERT, 2014).

Not only are women disproportionately affected by HIV infection, but factors such as violence against women, a lack of economic security and the continuing issues of stigma and discrimination around HIV result in significantly lower social, economic and health outcomes for HIV positive women across the world.

Compounding these issues is the fact that women, whether  HIV positive themselves or not, are more likely to care for family members with HIV than men. As Jennifer Gatsi-Mallet stated on the second day of AIDS 2014, it is imperative that women are given a voice in addressing the AIDS epidemic — women in leadership positions are integral to breaking down stigma and gender discrimination around HIV.

This is an issue epitomised in the values and priorities of the World YWCA, one of the world’s oldest women’s organisations with a presence in 128 countries across the world. The World YWCA delegation to AIDS 2014 consists of 21 young women from 15 countries, many of whom are living with HIV, and all of whom work to support HIV positive women in their communities in some way. The delegation is being hosted by YWCA Australia, and demonstrates the breadth of the YWCA movement.

A key priority for World YWCA is promoting and securing the sexual reproductive health and rights (SRHR) of women across the world, and specifically preventing HIV infection through proactive sexual health education and through the promotion of and education around female condoms.

From an Australian perspective, YWCA Australia is committed to improving the capabilities of young people to negotiate healthy relationships and to increase awareness of safer sex practices, including the promotion of the female condom as a women controlled barrier method.

Throughout AIDS 2014, the Conference has provided a space for many global perspectives on the epidemic, and the presentation of a wealth of important research on prevention, treatment and the ongoing search for a cure to HIV.

However, as well as the high level scientific approaches to ending the epidemic, the stories of people living with HIV are integral to a holistic understanding of the disease, and the very real impact it has on people living positively.

Joining the World YWCA delegation to AIDS 2014 is Sylvia, a Port Moresby woman from Papua New Guinea, and a leader in her community advocating for the rights of women living with HIV. Sylvia is HIV positive, and currently works as a counsellor with the Clinton Foundation at the Port Moresby General Hospital where she supports women living with HIV.

Sylvia’s journey as a woman living positively with HIV has been strongly impacted by the stigma and discrimination that plagues HIV positive people the world over. When Sylvia was diagnosed with HIV herself, along with her then 3-year old son, her husband became violent and abusive, accusing her of adultery. Through her involvement at YWCA Papua New Guinea, and by coming to AIDS 2014, Sylvia is determined to better the outcomes for women living with HIV in her community.

“I think that for me to come [to AIDS 2014], it really helps a lot in many ways,” Sylvia says. “I want to help women living positively in PNG, to have the privilege to speak on behalf of themselves, and to help them to advocate for better conditions, and empower them like how the YWCA has done for me.”

Sylvia believes that people living with HIV must be at the forefront of the movement to end the epidemic.

“At this conference, many people are talking about HIV, but I think they need to try to leave their comfort zone and come down to the level where the grassroots are, to where people are really feeling the pain, and see how they are living.”

By bringing this diversity of experiences, and putting young women at the forefront of leadership on SRHR, World YWCA and YWCA Australia are actively ensuring that young women’s voices are heard at this key conference for HIV prevention and treatment.

You can read more about the experiences of the World YWCA delegation to AIDS 2014 on the Women Leading Change blog here, or listen to the YWCA Australia podcasts here.