Why we need to support young migrant women to become leaders 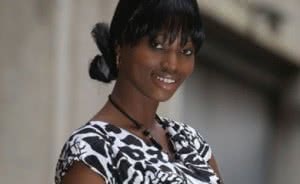 We asked a number of leading women who are speaking at the upcoming She Leads conference what advice they would give to aspiring women leaders. Below, Zoya Patel shares insights into her conversation with equality advocate, Khadija Glba.

Khadija Gbla does not think she was born a leader. Rather, it was an accidental journey that led her to discovering a talent for leadership she didn’t know she had. The 26-year-old former refugee from Sierra Leone came to Australia in 2001, after enduring a thirteen-year civil war. The transition to life in a new country was not as easy as she had expected.

“I came over thinking that Australia was going to be this wonderful, amazing place, and unfortunately it wasn’t turning out the way I thought. I was constantly unwell when I got here, I was being bullied at school because I was the only black kid there, I found myself at home being emotionally abused,” says Gbla. “Everything around me literally was falling apart, and I suppose there was this need to escape all of that, and that’s how I got into volunteering.’

Gbla started volunteering in 2004 for the Women’s Health State Wide program, Female Genital Mutilation (FGM), and soon found that she had a powerful voice, and a story that resonated with other young refugees.

“I started speaking on just my journey and my experiences, and then realised that other people agreed with me, they just didn’t feel as confident in voicing it,” says Gbla. “When I spoke out, it was like I wasn’t just speaking for me anymore, I was speaking out for other people and other refugees just like myself.”

The more she did speak out, the more Gbla was heard. And from her beginnings as a volunteer, Gbla became a key voice for her community, as well as for young migrants and refugees in Australia. Her achievements are numerous, stretching from chairing the Minister’s Youth Council to representing Australia at the Harvard National Model United Nations, being awarded a Pride of Australia Young Leader Medal, and joining the Multicultural Human Rights Honour Roll. All this while also studying Law and International Studies at Flinders University.

More important than any of the accolades to Gbla, however, is being a visible role model for young women from culturally and linguistically diverse backgrounds. While acknowledging that there are barriers facing young women from all backgrounds in gaining leadership positions in Australia, Gbla points out that migrant and refugee women have it even tougher.

“Language is of course a big barrier,” she says. “It doesn’t matter how educated I become; English is always going to be a third language. And then for young women who are less fortunate than me, who haven’t come as far in their learning, that can be a barrier. If you’re not confident in your speaking, or not confident in how you articulate yourself, it makes it hard to speak up, and it also makes it hard to then participate.”

Language barriers can create an isolating effect on young refugees and migrants and can impact on their ability to fully participate in Australian society. Lack of support from within migrant communities is also a big issue. Gbla uses her own experiences as an example.

“The way I was responded to [as a leader], for my cultural background, it wasn’t positive. It was the Australian community who saw it as positive. To be honest, I have always been smack bang in the middle between two cultures: one that accepts me, and one that totally thinks ‘No, you can’t do these things’, because I am breaking gender stereotypes.”

Gbla’s family and the African community in Australia were strongly against her progression as a young leader, particularly in regards to her advocacy for mental health and against domestic violence in refugee communities.

“If they had their way, they would pull me down. I have had threats made to me, attacks on my personal character, I have been defamed, all of that.”

Her own experiences connect to the broader issue of gender-based discrimination in many migrant communities.

Exacerbating this lack of support is a continued lack of non-white role models. Despite the reality of our multicultural society, what young women actually see in terms of women in leadership positions does not represent this diversity.

“You watch the news, you read magazines and see stories like Julia Gillard or Julie Bishop,” says Gbla. “It’s all well and good that they’re women, but they’re white women. They’re white middle class women and at the end of the day, my struggle and their struggle is not the same.

“I’m first and foremost a black woman, because that’s the first battle I have to fight. So if you’re giving me a role model who is white, you are going to put a barrier up. They don’t have the race issue to fight, they’re only fighting the gender battle. So while it’s all well and good to have Julia Gillard as our first female prime minister, I would love to see a woman who look like me out there. That is what I think is going to inspire young migrant girls, they need to see role models that look like them.”

Gbla says that it’s not that these roles models don’t exist, either. They might just not be as visible in the media as their white counterparts.

“We need to highlight young women in our communities who are doing great things and set them up so other young women can think ‘this is someone who looks like me, who comes from my background, who has a similar story to me and they have made it’. I think there is positivity in that and it reinforces our identity.”

Gbla says this visibility is something that ultimately helps create and support leaders in young migrant women. To see it is to believe you can achieve it. Importantly, this visibility can also have broader impacts in terms of political capital and agency.

For Gbla, this is part of a bigger journey towards empowerment that includes removing some of the assumptions people make about ethnic or migrant women.

“I think sometimes the image we have out there of ethnic women is as victims, as oppressed, and we’re essentially at the bottom of the ladder in many ways,” she says.

As a strong advocate for women and migrant’s rights, Gbla is making bold strides in combating the stereotype of ethnic women as victims, but the issue is compounded by the broader gender imbalances in our society. Gbla finds herself becoming frustrated at the fact that many young women today don’t care about feminism, in a time when gender discrimination not only occurs, but is becoming more insidious and hard to combat.

“I think our generation is struggling with issues that the older generation didn’t struggle with. The media scrutiny we have, body image issues, not being able to have a work-life balance – we face new challenges never faced before and sometimes I think it’s hard to fight. I’m a fighter and I feel like I’ve fought my whole life for a lot of things and fighting is not easy. When you have to fight for your rights, fight to be heard, or fight for whatever you think you deserve, it’s not easy.”

The fight is necessary though, and Gbla wants to make sure young women today carry the feminist baton forward for future generations.

“My encouragement to young women is don’t say, ‘I can’t do anything about that’, or ‘It’s just happening to me’, or ‘I’m overreacting’. Don’t let someone else tell you ‘don’t make a big deal out of it’.

“Just realize that when you speak up, you may think you’re speaking up just for yourself at that moment, but there is someone out there who your story is going to resonate with, who is going to hear your story and think, ‘that’s exactly what happened to me’. And you have empowered them, without being in the same place or the same room. You have empowered them and validated their experience.”

Khadija Gbla is speaking at the She Leads conference in Canberra on May 13. See more on the event here.

This article was first published on Women’s Agenda on May 5, 2014.