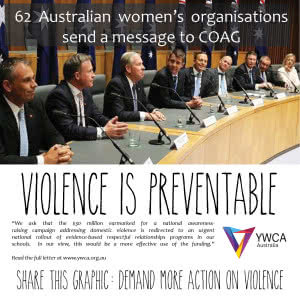 Today, more than 60 Australian women’s organisations signed a joint open letter to Prime Minister Tony Abbott calling for funding and leadership to address the root cause of violence against women, gender inequality.

With 31 women having been killed in Australia as a result of gendered violence this year alone, YWCA Australia felt it was time to take a concerted approach.

“Where we used to talk about the death of ‘one women a week’, tragically the figures are now closer to two women. Violence against women is a national emergency that requires urgent responses from the leader of our nation,” said Dr Lambert said.

The call came ahead of Friday’s COAG meeting, where the agenda was set to address the problem of violence against women at a national level.

“It is vital that, at a time when we have unprecedented strategic alignment of political and cultural will to end violence against women, that the political leadership of our country puts the dollars behind initiatives that will end this scourge,” said Dr Lambert.

The signatories also call on the Australian Government to reconsider the allocation of a $30 million awareness-raising campaign to ensure that primary violence prevention programming is embedded within primary and secondary schools.

YWCA Canberra is a signatory to the letter, below in full. We are also campaigning to have the ACT Government fund a primary prevention program for all Canberra public primary schools – sign the petition here.

We, the undersigned, are writing to you about this week’s Council of Australian Governments (COAG) meeting to discuss ending violence against women.

The media reports that, this year alone, 31 women in Australia have died as a result of gender based violence. And we’re not even half way through the year. Where we used to talk about the death of ‘one women a week’, tragically the figures are now closer to two women. Violence against women is a national emergency that requires urgent responses from the leader of our nation.

Yet, the murders of these women as a result of gender-based violence (and countless other women, children and men) emphasises the need for further decisive action.

It is widely recognised, including in the National Plan, that a holistic approach to ending violence against women is needed – a strategic approach that encompasses both primary prevention and specialist frontline services. It is also widely recognised that both aspects of the approach need adequate long-term funding to effectively address the epidemic of violence against women.

Robust, long-term and adequate resourcing for all the elements of the National Plan is critical. At a time of heightened community awareness, political momentum, and a real appetite for cultural change, we urge you to ensure that the COAG meeting this Friday delivers the political commitment to allocate the funding required to end violence against women. We urge you to reconsider your funding priorities to ensure that desperately needed financial resources are spent on initiatives that will make the biggest and most profound impact on Australia’s culture of violence. We need more than lip service to be paid to this issue.

Frontline services
Unprecedented demand for services, without commensurate funding to match this demand, has left family violence and sexual assault services struggling and under incredible pressure.

Specialist health, counselling, housing and legal services, critical elements of the response to violence against women, are also experiencing unprecedented demands with inadequate funding and funding uncertainty. Long term, sustained funding for these services is essential.

In the interim report released this month, the Senate Committee that inquired into Domestic Violence in Australia called for respectful relationships education to be implemented in all schools through the national curriculum, as a primary prevention measure to end violence against women in the long term.

We ask that the $30 million earmarked for a national awareness-raising campaign addressing domestic violence (to be jointly-funded by the states and territories) is redirected to an urgent national rollout of evidence-based respectful relationships programs in our schools. In our view, this would be a more effective use of the funding.

Prime Minister, we are asking you to:
• Reconsider the allocation of the Australian Government’s $30 million awareness-raising campaign to ensure that primary violence prevention programming is embedded in the national curriculum.
• Ensure COAG provides robust, long-term and adequate resourcing of women’s specialist violence and related services (including health, counselling, housing and legal services) to enable better outcomes for women who present in crisis and with complex needs.

We wish you every success in your meeting on Friday and for the work of COAG in the coming year.

Many of us have been working in this sector for years and we have never seen such a strategic alignment of political and cultural will to end violence against women – but we need your leadership, and the leadership of COAG, to resource and drive this change.

As Prime Minister, and the Minister for Women, you have a unique opportunity and capacity to address our culture of misogyny and violence against women and girls. We urge you to further steps to meet the challenge, and we look forward to working with you to create a safer nation for our community.