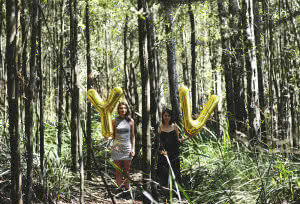 In the lead up to inaugural She Leads College Conference, taking place Tuesday 5 May at University of Canberra, we’ll be giving you the chance to get to know our speakers. Meet Haylee Collins, who is the co-founder, creative director and editor of Young Vagabond. Check out her blog below about how Young Vagabond is smashing gender stereotypes.

Earlier this year I was fortunate to meet former Prime Minister, the honourable Julia Gillard, and hear her keynote address at the Women’s Agenda Leadership Awards.

Speaking of her hopes for women in leadership, she made a statement that perfectly summarised the nature of gender inequality entrenched in our society:

“In the back of our brains there are sexist stereotypes still whispering.”

It’s true, the sexist stereotypes that grow in our minds – informed throughout our childhood and adolescence by the media, and the examples we see around us in society, often from within our own families – are generally so ingrained by adulthood that we can live out our lives never fully understanding the extent of our own unconscious gender biases.

What if we could disrupt these biases before they became so entrenched?

The hope of giving young women the chance to reassess the limiting messages they are fed about gender motivated Ashleigh Grogan and I to launch the alternative digital magazine for teen girls, Young Vagabond, two years ago.

As Young Vagabond has grown, the reality of the gender inequality young people continue to face prompted us to go one step further, launching Young Vagabond workshops for high school students, to smash gender stereotypes.

Run by young people, for young people, Young Vagabond School Workshops empower young people to think critically about the way constructs of gender affect their lives. Using interactive and creative facilitations, we challenge existing ideas perpetuated through the media and other social systems.

We engage year nine students to look at historical, traditional and modern definitions of gender presented by mediums such as advertising and social media. Students are broken into male and female groups and challenged to consider how these messages align with their own gender identity.

Following an overwhelmingly successful pilot, Westpac came on board to support Young Vagabond through the Ruby Connection, launching the Young Vagabond and Westpac School Series, which for the first half of 2015 will engage over 2,000 Year 9 students at 11 schools across Victoria in the conversation on deconstructing gender stereotypes.

Being able to witness students’ eyes open to the gender biases prevalent in our society is utterly inspiring. I have been brought to tears as 15 year old girls end a 90 minute session telling our facilitators about everything they hope to achieve, whilst outlining the obstacles they understand might stand in their way due to their gender, and the tools they will need to overcome those obstacles.

We’ve had teenage boys come away understanding that they are not limited by narrow ideas of masculinity that see them pushed into emotionless, aggressive patterns of behaviour.

The results aren’t only emotive. Coming out of the workshops, 72 percent of students come away understanding more about gender stereotypes and the impact these stereotypes can have on them. 16 percent request more time to learn about gender issues.

And this is only the beginning, with Westpac announcing the opportunity for schools in New South Wales to experience the Young Vagabond workshops later this year.

Empowering students to think critically about gender bias at such a critical stage of their development in their own lives, ensures our next generation of leaders will be smashing gender stereotypes well before they ever get a chance to grow into discouraging whispers.